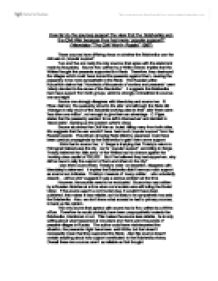 How far do the sources support the view that the Bolsheviks won the Civil War because they had more 'popular support?' (Mawdsley &quot;The Civil War in Russia&quot; 1987)

How far do the sources support the view that the Bolsheviks won the Civil War because they had more 'popular support?' (Mawdsley "The Civil War in Russia" 1987) These sources have differing views on whether the Bolsheviks won the civil war on 'popular support'. Two and five are really the only sources that agree with the statement made by Mawdsley. Source five, written by a White colonel, implies that the Whites thought the peasants supported the Reds. Therefore, they destroyed the villages which could have turned the peasants against them, causing the peasantry to be more sympathetic to the Reds. The Russian writer, Kukushkin claims that 'Hundreds of thousands of workers and peasants' were 'utterly devoted to the cause of the Revolution'. It suggests the Bolsheviks had mass support from both groups, which is strongly contradicted in sources one and eight. Source one strongly disagrees with Mawdsley and source two. ...read more.

I also think source three, Trotsky's order on desertion, disagrees with Mawdsley's statement. It implies the Bolsheviks didn't have as much support as source two indicates. Trotsky's measure of 'every soldier... who voluntarily deserts... will be shot' suggests it was a serious problem at the time. However, the sources need to be evaluated. Source two was written by a Russian historian at a time when communists were still ruling the Soviet Union. If the source wasn't a communist view, it wouldn't have been published, this makes it less reliable, as it is likely to be sympathetic towards the Bolsheviks. Also, we don't know what access he had to primary sources, to back up his opinion. The only source that agrees with source two is five, written by a White officer. Therefore he would probably have been unsympathetic towards the Bolsheviks, intentional or not. This makes the source less reliable, he is only writing about what happened at one place and there were thousands of peasant villages in Russia. ...read more.

He could have been exiled for being anti-Stalin, or left of his own accord. It doesn't directly state anything about the Bolsheviks winning due to support. The final source was written by a western historian, which could mean he wasn't sympathetic towards the Reds. It was written after the fall of communism in Russia, so the author wouldn't be worried about putting the Bolsheviks in a bad light. The source was written long after the civil war and we don't know what primary sources he used. This all makes the source less reliable. After reading, evaluating and weighing up all the sources, I have come to the conclusion that, overall, they tend to disagree with the Mawdsley's statement. All but two sources, disagreed with it and they weren't as reliable as I initially thought. Overall the sources that disagreed were weightier. Overall, the sources didn't give an adequate range of reasons for the Reds' victory, only source one gave other reasons for the Bolsheviks winning the civil war. ...read more.