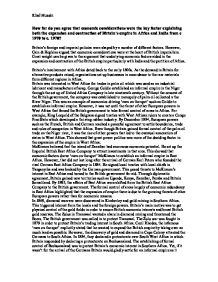 How far do you agree that economic considerations were the key factor explaining both the expansion and contraction of Birtain's empire in Africa and India from c 1970 to c. 1970?

How far do you agree that economic considerations were the key factor explaining both the expansion and contraction of Birtain's empire in Africa and India from c 1970 to c. 1970? Britain's foreign and imperial policies were shaped by a number of different factors. However, Cain & Hopkins argued that economic considerations were at the heart of British imperialism. Great weight can be given to the argument that underlying economic factors aided in the expansion and contraction of the British empire particularly with India and the partition of Africa. Britain's involvement with Africa dated back to the early 1800s. As the demand in Britain for alternative products raised, organizations set up businesses in accordance to the raw materials from different regions in Africa. Britain was interested in West Africa for trades in palm oil which was used as an industrial lubricant and manufacture of soap. George Goldie established an informal empire in the Niger through the set up of United Africa Company in late nineteenth century. Without the consent of the British government, the company was established to monopoly of palm oil collected n the River Niger. This was an example of economics driving 'men on the spot' such as Goldie to establish an informal empire. ...read more.

The establishing of formal control of Bechuanaland was to protect Britain's economic interest in Southern Africa. Yet, if it wasn't for the arrival of the Germans Britain would gladly settle for an informal empire as it would spare her from economic distress. Also, Southern Africa has yet to prove to be lucrative to Britain. Export trade with south Africa worth 15 million pounds per year but this was not enough to justify the 200 million pounds war fought. Economics was a driving factor for these 'men on the spot' to explore Africa for raw materials and trading opportunities. Arguably, the British government only stepped in and took formal control to protect the interest of these 'men on the spot' (inherently keeping the British economy alive) against other powers such as Germany and France. India was important to Britain in more ways than one. India was progressively swamped by cheap British goods and export goods such as tea, indigo and spices at fairly low prices. Lord Curzon, viceroy of India claimed that 'as long as we rule India, we are the greatest power in the world'. In seventeenth century, the East India Company was set up and under this establishment was the expansion of British rule in India. ...read more.

The empire could no longer sustained the Kenya uprisings and grant her independence in 1963. The process of dismantling the empire in Africa was already underway; Tanganyika gained independence in 1961, as did Uganda in 1963. As shown, economics alone was not enough reason to disintegrate Africa from the British empire. If nationalists such as Kenyatta and Nhkrumah took a backseat, Britain would not have been put under economic pressure to sustain riots and uprisings. Yes, economics was the reason why the British gave in to nationalism but if it wasn't for the uprisings and riots, the British arguably would take a longer time to grant independence to Africa. The role of economics was more significant in the expansion of the British empire in Africa and India in the sense that it is more consequential rather than a direct causal role; economics interests what drove men on the spot to expand, and to protect economics interest from other rising powers. The same rule could be applied to the contraction of the empire. Although nationalism was the key factor in the eventual decolonization of the empire in Africa and India, it is the lack of finance that prevented the British government from fighting against nationalism. ?? ?? ?? ?? Khal Hussin ...read more.