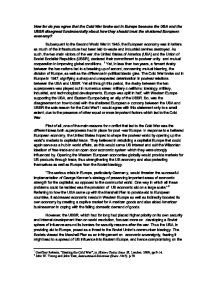 How far do you agree that the Cold War broke out in Europe because the USA and the USSR disagreed fundamentally about how they should treat the shattered European economy?

How far do you agree that the Cold War broke out in Europe because the USA and the USSR disagreed fundamentally about how they should treat the shattered European economy? Subsequent to the Second World War in 1945, the European economy was in tatters as much of the infrastructure had been laid to waste and industrial centres destroyed. As such, the two main victors of the war, the United States of America (USA) and the Union of Soviet Socialist Republics (USSR), declared their commitment to postwar unity and mutual cooperation in improving global conditions. 1 Yet, in less than two years, a fervent rivalry between the two nations led to a breaking up of accord, concerning mutual blaming, the division of Europe, as well as the difference in political ideologies. The Cold War broke out in Europe in 1947, signifying a sharp and unexpected deterioration in postwar relations between the USA and USSR. Yet all through this period, the rivalry between the two superpowers was played out in numerous areas: military coalitions; ideology, military, industrial, and technological developments. Europe was split in half, with Western Europe supporting the USA, and Eastern Europe being an ally of the USSR. ...read more.

Stripping Germany of its economic power would create a tougher buffer state for the USSR, ensuring peace in the area. Additionally, the dispute over Germany escalated after Truman refused to give the USSR reparations from West Germany's industrial plants because he believed it would hamper Germany's economic recovery further. Stalin responded by splitting off the Soviet sector of Germany as a communist state. This proved that the two different points of views on how the shattered European economy, Germany in this case, led to a strong dispute of ideas and also setting the path for physical response and confrontation. Though the above stated points clearly proved the huge margin separating the USA and USSR in their views on the shattered European economy, and how it progressed the rift between the two superpowers, there are also various other factors in different fields that fundamentally contributed to the development of the Cold War. The main underlying political motive of the USA all the while, behind the economic concerns, was to prevent impoverished Western Europe from falling under Soviet communist control. Economic motives were secondary, coming under the one main factor of preventing the spread of communism. ...read more.

Yet, the most important factor which proved the alliance of the USA and USSR to be impossible would be the totally unlike political ideologies which both nations had in place. Capitalism would never be able to be put in effect with communism, and as such, a conflict would be sure to arise in fighting for a similar interest. Weighing the multiple factors that played a part in causing the Cold War, I regard the difference in ideology as the single most influential factor. It was in fact due to the different wants of the USA and USSR that many misunderstandings and problems arose, and the disagreement regarding the treatment of the shattered European economy was brought about by this factor. 1 Geoffrey Roberts, "Starting the Cold War", in History Today Issue 38, London: 2000, pp.9-14. 2 John W. Young and John Tent, International Relations (Since 1945). p.70 3 Geoffrey Roberts, "Moscow and the Marshall Plan: Politics, Ideology and the Onset of the Cold War, 1947", in Europe-Asia Studies Vol. 46. Taylor & Francis Ltd, 1994, pp.1371-1386 4 Geoffrey Roberts, "Starting the Cold War", in History Today Issue 38, London: 2000, p.11. 5 Klaus Larres and Ann Lane, The Cold War. Malden: Blackwell, 2001. ?? ?? ?? ?? ...read more.

This is a strong essay that has a good understanding of several interpretations of the Cold War's causes, but would benefit from a stronger quality of writing and more developed factual evidence. The student recognises that the question is asking ...

This is a strong essay that has a good understanding of several interpretations of the Cold War's causes, but would benefit from a stronger quality of writing and more developed factual evidence. The student recognises that the question is asking "How far..." by presenting several alternative interpretations of the causes of the Cold War. This is good as it shows that the student is thinking widely about the causes and not just focusing on one (possibly their own) opinion. Furthermore, by saying things like "Many other small events also threatened the relationship...", the student is showing that they have the knowledge and understanding to judge one factor to be more important than another. However, in the eighth paragraph the student appears to confuse economic and political causes: they could make the case for political causes clearer by pointing out things like the fact the USSR was a one-party state while the USA isn't. This would make that particular section stronger. The student is right to quote historians in the third paragraph, because it shows that they can blend their own analysis with that of established historians, and it also shows evidence of wider reading. However, they could improve by giving the name of the historian in the main part of the essay as well as the footnote: for example, they could say "Young and Tent have argued that...", as this would reinforce the idea that they can combine their own analysis with that of others.

The factual detail in this essay is strong. The student knows about international agreements such as the Marshall Plan and the Yalta agreement, but can also talk about military concepts such as the Red Army as well as political and economic ideas like different forms of freedom (limited and individual). All of this shows that the student has the knowledge to back up their arguments, and aren't simply making vague guesses about what happened. However, the student could improve by using more dates, as it would allow them to analyse and compare long-term and short-term causes: for example, pointing out that the Yalta agreement was made in 1945 (two years prior to the start of the Cold War) would let them go into another sentence about how disagreement over it was perhaps a long-term factor in the cause of the Cold War. The student does not spend too much time describing what happened rather than explaining it, which is good as it shows they have more understanding about the Cold War than just facts and dates. It is important to get a balance: too many vague statements ("There was an agreement" instead of what this student says, "the Yalta agreement") shows a lack of evidence, but too much evidence shows a lack of the ability to analyse.

The essay has a very good conclusion: by reaching a judgement then saying "but only to a small extent", the student is repeating the ability they showed in the introduction to judge one factor as being more important than another, which is good as it shows they can sustain this and not just do it once. They then go on to summarise the arguments they have made in the essay, which is good as it shows they can organise their ideas. While it was right for the student to mention the birth of Communist China, as they mentioned it in the essay, they hardly addressed it in the essay, so it sounds like they are simply repeating themselves in the conclusion rather than summarising.

The student's spelling, grammar and punctuation is very good, which shows the examiner that they have not rushed their essay and avoids any confusion. However, the essay is not structured as well as it could be: for example, the third paragraph from the end only has two sentences and seems out of place. It would give the essay a much better logical flow if paragraphs such as this one were added to others so that they did not look small and out of place. Also, it would be better for the student to avoid using "I" frequently, such as "I would agree...", as it is informal and also makes their judgements sound personal and one-sided.