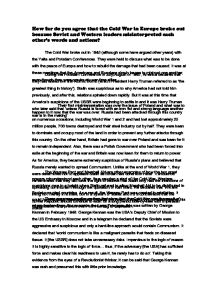 How far do you agree that the Cold War in Europe broke out because Soviet and Western leaders misinterpreted each other's words and actions?

How far do you agree that the Cold War in Europe broke out because Soviet and Western leaders misinterpreted each other's words and actions? The Cold War broke out in 1945 (although some have argued other years) with the Yalta and Potsdam Conferences. They were held to discuss what was to be done with the peace of Europe and how to rebuild the damage that had been caused. It was at these meetings that the Americans and Russians slowly began to mistrust one another, even though they were previously war-time allies. During the Potsdam Conference in July/August of 1945, America declared that they had tested the first Atomic Bomb (which President Harry Truman referred to as 'the greatest thing in history'). Stalin was suspicious as to why America had not told him previously, and after this, relations spiraled down rapidly. But it was at this time that America's suspicions of the USSR were beginning to settle in and it was Harry Truman who later said that 'unless Russia is faced with an iron fist and strong language another war is in the making' Their first misinterpretation was over the issue of Poland and what was to happen to it now that the war was over. Russia had been attacked through this country on numerous occasions, including World War 1 and 2 and had lost approximately 25 million people, 700 towns destroyed and their steel industry cut by half. ...read more.

thus, if the adversary [the USA] has sufficient force and makes clear his readiness to use it, he rarely has to do so'. Taking this evidence from the eyes of a Revolutionist thinker, it can be said that George Kennan was rash and presumed this with little prior knowledge. But there were other factors which led to the beginning of the Cold War. People such as Vojtech Mastny have accused Stalin as being the sole man to cause the Cold War. He regarded Stalin's foreign policy in Eastern Europe as the cause of the Cold War. His Red Army 'liberated' land, therefore claiming it to be theirs. To the USA, this looked aggressive and a determined effort at spreading World Communism. The Berlin Blockade was the first direct attack on the West from the Soviet Union. It started when Berlin was divided into 4 parts and these 3 parts that belonged to the West were surrounded by Soviet territory. This upset and frightened Stalin as he believed that they would influence his Eastern Berlin and Germany. In rebellion, he closed of all the main routes by land, sea and road that lead into West Berlin. In response to this, America began to send in 450 aeroplanes of food and other supplies each day in order to prevent West Berlin from collapse. The America viewed all of this as a first attack on them and so serious action was necessary. ...read more.

meant that they were all desperate to regain their reputation in World Status and so felt that by gaining land would they become more powerful. And so, with many of the countries trying to rebuild their prestige, arguments and suspicion would naturally arise. The USSR had also just become a World Leader and after many years of shying away, they felt that they needed to exert their power, although this could be a much debated view and one usually take by a Traditionalist thinker. There has been much debate over who really started the Cold War. A traditionalist thinker would say that it was the doings of the Soviet Union, whereas a Revolutionist would say that America was to blame and finally a Post-Revolutionist would say that it was the work of both Powers. A traditionalist would argue that Russia only had plans to spread Communism in an aggressive manner and Britain and the USA were only trying to be defensive. On the other hand, a Revolutionist would assert that it was the Americans who were all to blame and that they were aggressive even before the start of the Second World War. And so in conclusion, I would say that the Cold War was a result of mainly misunderstandings but it should be remembered that there were many other reasons as to why the USA and the USSR became so suspicious of each other, for example, the fact that there was a huge power-vacuum both around the world and in Europe and the Berlin Blockade of 1948. ...read more.