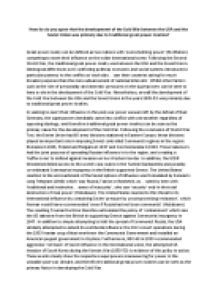 How far do you agree that the developmemt of the Cold War between the USA and the Soviet Union was primarly due to traditional great power rivalries?

These events clearly show the respective superpowers manoeuvring for power in the unstable post-war climate, and therefore traditional great power rivalries can be seen as the primary factor in developing the Cold War. The role of ideology was to increase the potency of the great power rivalries between Communist Russia and Capitalist America. McMahon argues ?Ideology imparted? a strong faith in the world-historical roles of their respective nations?, the United States ?viewed the establishment of a freer and more open international economic system as indispensable to the post-war order? seen with the Marshall Plan in 1948; although, it may be argued the plan also had a purely economic element as Communism threated the US?s economic access to the lucrative European market. Whilst the USSR ?assumed conflict between the socialist and capitalist world to be inevitable? and set up Comminform in 1947 to coordinate Communist movements worldwide to entice a worldwide Communist revolution, whilst Commecon in 1948 in response to Marshall Aid. However, the primary aim of Stalin?s Russia was ensuring the security of the regime rather than spreading Communism worldwide. The Berlin Blockade of 1948-49 can be seen as ideologically motivated: Stalin attempted to prise the prosperous West Berlin, which due to the economical depravity of East Berlin was highly embarrassing for Communism, from the Western sphere of influence. ...read more.