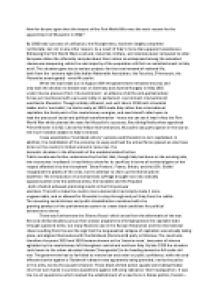 How far do you agree that the impact of the First World War was the main reason for the appointment of Mussolini in 1922?

﻿How far do you agree that the impact of the First World War was the main reason for the appointment of Mussolini in 1922? By 1900 Italy's process of unification, the Risorgimento, had been largely completed territorially, but not in any other respect. As a result of Italy's more-than-apparent weaknesses (following the First World War) a cultural, industrial, military, and colonial power compared to older European states the inferiority complex about their nation so widespread among the educated classes was deepening, while the vast majority of the population still felt no real attachment to Italy at all. This situation gave rise to various projects for the total renewal of national life, both from the extreme right (the Italian Nationalist Association, the Futurists, D'Annunzio, the Florentine avant-garde) - enter Mussolini. When the war broke out in August 1914 the government remained neutral, and only took the decision to declare war on Germany and Austria-Hungary in May 1915 under intense pressure from `interventionism?, an alliance of all the anti-parliamentary forces just mentioned with a pro-war lobby in parliament. A prominent interventionist was Benito Mussolini. Though initially a Marxist, and until late in 1914 both a Socialist leader and a `neutralist', he had as early as 1909 made Italy rather than international capitalism the focal point of his revolutionary energies, and saw himself called upon to lead the process of social and political transformation - hence we can see it was in-fact the First World War which planted the roots for Mussolini?s successes, flourishing finally when appointed Prime Minister in 1922. ...read more.

The government had so far failed to restore law and order or public confidence, while the only effective barrier against a `Bolshevik' takeover was apparently being provided, not by the police or the army, but by the squadre d'azione. These black-shirted action squads were taking thelaw into their own hands in punitive expeditions against left-wing radicals or their headquarters. It was the rise of squadrismo which marked the establishment of a new force in Italian politics, Fascism - Mussolini had combined an opportunity arisen which had arisen from the war, and combined it with his own, showing to us that perhaps it wasn?t solely an element of the First World War which lead to the appointment of Mussolini. This initial sign of Mussolini?s personal actions leading to his success grew into a tactical game-plan from Mussolini. This is seen where Mussolini had formed the Fasci di combattimento in Milan in March 1919, but the national elections later that year had only demonstrated Fascism's irrelevance to the political life of the country, but despite this it did show Mussolini?s desire to make his way to political power. Fortuneately for Mussolini at this stage, with the rise of squadrismo during the biennio rosso the situation changed dramatically. Since each `action squad' was coordinated by a local Fascio and hence connected to the Fascist headquarters in Milan, the spread of squadrismo turned Fascism into a powerful outlet for populist counter-revolutionary and revolutionary passions, especially in areas where the left had its strongholds. ...read more.

Another factor in Mussolini=s rise was the and to re-enfor Finally it should not be forgotten that had Victor Emmanuel chosen to sign the emergency decree in October 1922 then Mussolini's gamble would not have paid off. In short, the First World War provided the necessary, but not the sufficient conditions, for Mussolini's rise to power. Even after the March on Rome, it was further miscalculations by parliamentarians and the tacit support of both the Church and the Monarchy which enabled him to take shrewd advantage of the Matteotti crisis of 1924 and so lay the foundations of an authoritarian (`totalitarian=) state. Only then had Mussolini=s `rise to power' progressed to the point where he could embark on the doomed Fascist experiment in the creation of a `new Italy'. Mussolinis rise to power was undoubtly his own tactical astuteness. He cleverly applied a blend of paramilitary violence and diplomacy, extraparliamentary and parliamentary tactics, or, as he once put it himself, `legalism and illegalism', to exploit to the full the opportunities created by the spread of squadrismo, radically changing policies and resisting several challenges to his leadership on the was - but clearly without the First World War, this would have most definitely not been a possibility as there simply wouldn?t have been the conditions present for a full Political takeover to take place - as it did so - ...read more.