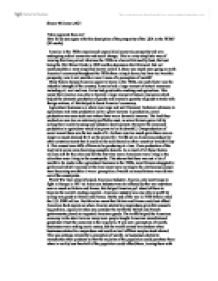 How far do you agree with this description of the prosperity of the USA in the 1920s? (30 marks)

'More apparent than real' How far do you agree with this description of the prosperity of the USA in the 1920s? (30 marks) America in the 1920s experienced unparalleled economic prosperity and was undergoing radical economic and social change. This is a very simplistic way of viewing this time period. Most see the 1920s as a boom followed by bust, the bust being the Wall Street Crash in 1929 and the depression that followed. But as I mentioned this a very simplified way to look at it, there was much more going on with America's economy throughout the 1920s than a simple boom, but how real was this prosperity, was it real wealth or was it more of a perception of wealth? Many factors helped America appear to boom in the 1920s, one such factor was the industrial strength of the country; America had a large amount of natural resources including oil, coal and iron. It also had good cattle ranching and agriculture. This meant that America was able to harvest a large amount of natural resources which helped the domestic production of goods and created a quantity of goods to trade with foreign nations, all this helped to boost America's economy. Agricultural business as a whole was large and well financed. ...read more.

Although this would later lead to the Wall Street Crash in 1929 it did help to stimulate the economy and create a boom during the 1920s. They also placed tariffs on foreign goods. These tariffs meant that imported goods were given higher tax, making the domestic, American made products cheaper and reducing the competition for American businesses. Another typically Republican policy enacted in the 1920s was lower taxes, they believed that the Government should not take away loads of the people's money and then spend it on welfare, but rather that the people knew how to spend their money best so allow people to have more of their own money and allow them to spend it, this would help the economy grow. Neither of the political parties in America, the Republicans and the Democrats have particularly high public spending rates compared to the UK, as Americans generally see high public spending on anything such a welfare as too socialist, but out of the two political parties the Republicans are the party of low taxes and low public spending compared to the Democrats. Trusts flourished under the Republican presidencies, large companies were allowed to control whole industries, such as Carnegie controlling the steel industry, as it was believed this would lead to them becoming more efficient and successful. ...read more.

The economy was growing but only the top 5% of the people were benefitting from the effects whilst the bottom 10% was suffering worse than ever. In conclusion, many big businesses' thrived throughout the 1920s; the laissez faire policies of the Republican Presidents helped them to grow significantly. However a growth in big business did not help the ordinary Americans. Wealth was far from evenly distributed and the poorest 42% of the people only received 10% of the nation's wealth. The countries wealth as whole was growing but this only created the illusion that the whole of the country was getting richer, the poor stayed poor. Only the face of America that was shown to the rest of the world, huge corporations, benefitted from the "boom" in the 1920s. Many small businesses and farmers suffered once they started to over produce, as tariffs placed on foreign goods by the American government created a response of tariffs being put on goods the American's exported, meaning they could not sell their surplus grain and the prices were driven down. The consumer goods boom was only a boom for the richer half of the population, as over half the country could not afford to partake in it, and those who did bought products on credit and ended up in debt. The prosperity of the USA in the 1920s was more apparent than real. ?? ?? ?? ?? Simon Williams U6G1 ...read more.