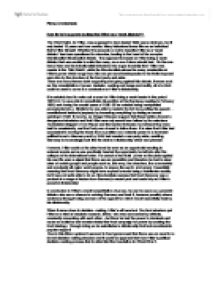 How far is it accurate to describe Hitler as a 'weak dictator'?

How far is it accurate to describe Hitler as a 'weak dictator'? The Third Reich, for Hitler, was supposed to have lasted 1000 years minimum, but it only lasted 12 years and four months. Many historians blame this on an individual that's Hitler himself. Whether it is accurate or not to describe Hitler as a 'weak dictator' has been questioned for decades, leading to the heart of the complex Intentionalist-Structuralist debate. The argument is based on Hitler being a weak dictator that was unable to unite Germany, as a new Fuhrer should had. On the one hand, there are the Intentionalist historians who argue forcefully that `Hitler was master in the Third Reich', while the Structuralists stress the many constraints on Hitler's power which range from his own personal inadequacies to the limits imposed upon him by the structure of the Nazi party and state. There are many themes both supporting and going against this debate, themes such as; the consolidation of power; decision-making and image and reality, all of which could be used to come to a conclusion on Hitler's dictatorship. It is certainly hard to make out a case for Hitler being a weak leader in the period 1925-33. ...read more.

When it came down to decision-making, Hitler's will was law! The Nazi structure put Hitler as a kind of absolute monarch, f�hrer, who was surrounded by officials, constantly competing with each other. As f�hrer he had the power to dominate and rouse an audience and masterminded the Nazi campaign for power by creating the Nazi ideology. Through doing so he established a dictatorship that had considerable popular support! Due to this f�hrer system it seemed to Nazi government that there was no need for a formal decision making structure and it could be apparent that from Hitler's political decision-making process that in effect laid the foundation for World War 2. It is clear that Hitler was central to the regime, as developments such as the SS developing, extermination of the Jews and involvement in the war, would not have happened without him. Intentionalists argue that Hitler was a strong dictator who controlled and planned everything. Whereas, it could also be seen that Hitler's power to make informed decisions was limited by the very system he had created and that he was a prisoner of his own structure. Although maybe providing an overall vision he was a man remote from public affairs who was uninvolved in actual decision-making. ...read more.

In reality also, Hitler was helped into power, through gaining an advantage from the collapse of international order and from being given the job in the first place, whereas his image had suggested otherwise. Hitler's tactics through propaganda in reality could also be seen as the weakness of a dictator as maybe he doubted his ability to gain support and power from the German people and therefore felt he had to fight off an beat opponents through methods such as the on station radios. In total conclusion, from the evidence I've provided Hitler seems to have been a weak dictator. He had definite powers and initiation, through his quick reaction to the international crisis and problem German fell into during the late 1920's and through his ability to gain such support and following from the majority of the German population despite lack of controlled organisation structure and decision making in his own party. He certainly achieved highly through the use of propaganda, yet in reality and behind closed doors he was failing fast, which is why the Third Reich ended when it did and why Hitler's dictatorship can be concluded as weak. Fiona Crookshank ...read more.