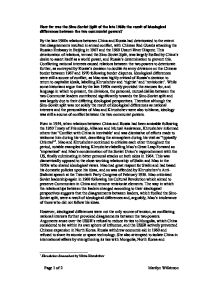 How far sas the Sino-Soviet Split of the late 1960s the result of ideological differences between the two Communist powers?

How far was the Sino-Soviet Split of the late 1960s the result of ideological differences between the two communist powers? By the late 1960s relations between China and Russia had deteriorated to the extent that disagreements resulted in armed conflict, with Chinese Red Guards attacking the Russian Embassy in Beijing in 1967 and the 1969 Ussuri River Dispute. This deterioration of relations, termed the Sino-Soviet Split, was largely fuelled by China's desire to assert itself as a world power, and Russia's determination to prevent this. Conflicting national interests caused relations between the two powers to deteriorate further, as conveyed by Russia's decision to double its army divisions on the Chinese border between 1967 and 1970 following border disputes. Ideological differences were still a source of conflict, as Mao was highly critical of Russia's decision to return to capitalist ideals, labelling Khrushchev and 'rightist' and 'revisionist'. While some historians argue that by the late 1960s merely provided the excuses for, and language in which to present, the divisions, the personal, mutual dislike between the two Communist leaders contributed significantly towards the Sino-Soviet split and was largely due to their differing ideological perspectives. ...read more.

However, ideological differences were not the only source of tension, as conflicting national interests further provoked disagreements between the two powers. Arguments arose over the USSR's refusal to reduce its ties to Mongolia, which China considered to be within its own sphere of influence, and the USSR actively prevented Chinese expansion in North Korea. Russia withdrew economic aid in 1960 and refused to share its atomic or space technology. She also attempted to isolate China in international affairs by strengthening its ties with Mongolia, North Korea and Vietnam following Zhou Enlai's2 attempts to present China as the leader of world revolution. Russia's actions are generally considered to be their attempt to thwart China's struggle to become a world power. Following the Soviet invasion of Czechoslovakia the Chinese knew that Russia was prepared to use force against another Communist country, causing them to fear invasion and even nuclear warfare. Their fears were augmented by the appointment of Colonel General Tolubko, deputy commander of the USSR's Strategic Rocket Forces, to command the Soviet Far East Military District. ...read more.

To conclude, the mutual hostility between the two leaders, caused by differing ideological perspectives, was the most significant factor which resulted in to relations between the two communist powers deteriorating. The legacy of Khrushchev meant that by the mid 1960s relations had been damaged irrevocably and, despite changes in Soviet leadership, resulted in numerous instances of direct armed conflict. Mao was also to blame, as he was intolerant of any ideas that he didn't consider fully in line with Communist theory, deeming them 'revisionist', and considered himself superior to Khrushchev as he had been in power longer. Hypocritically, he sought a Rapprochement with the US in 1969, which he had condemned the USSR for doing a decade earlier, suggesting that the personality clash of the two leaders may not have been purely because of ideology. Furthermore, conflicting national interests were not ideological in nature. However, the different ideological perspectives of the leaders provoked tension between them and meant that they could not be solved amicably, ultimately resulting in the Sino-Soviet Split. 1 Khrushchev Remembers by Nikita Khrushchev 2 The Chinese Prime Minister ?? ?? ?? ?? Page 1 of 2 Marilyn Wilkinson ...read more.