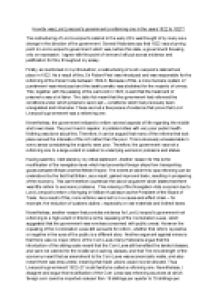 How far was Lord Liverpool's government a reforming one in the years 1822 to 1827?

Transfer-Encoding: chunked ﻿How far was Lord Liverpool?s government a reforming one in the years 1822 to 1827? The restructuring of Lord Liverpool?s cabinet in the early 20?s was thought of by many as a change in the direction of the government. Several Historians say that 1822 was a turning point in Lord Liverpool?s government which was, before this date, a government focusing only on repression. I agree with this point of view and will put across evidence and justification for this, throughout my essay. Firstly, as mentioned in my introduction, a restructuring of Lord Liverpool?s cabinet took place in 1822. As a result of this, Sir Robert Peel was introduced and was responsible for the reforming of the Penal Code between 1824-6. Because of this, a more humane system of punishment was introduced and the death penalty was abolished for the majority of crimes. This, together with the passing of the Jail?s Act in 1823, meant that the treatment of prisoner?s was a lot fairer. ...read more.

Nevertheless, another reason that provides evidence for Lord Liverpool?s government not reforming to a high extent in this time is the repealing of the Combination Laws, which suggested that the government was now less concerned with public unrest. However the repealing of the Combination Laws still accounts for reform, whether that reform is positive or negative in the eyes of the public is a different story. Another argument against mines is that there was no major reform of the Corn Laws. Many Historians argue that the introduction of the sliding scale meant that the Corn Laws still benefited the landed classes, and were not catered for the middle and working classes, and that The new strength of the economy meant that as amendment to the Corn Laws was economically viable, and also meant there was less unrest, meaning that trade unions would now be allowed. Thus Liverpool?s government 1822?27 could hardly be called a reforming one. Nevertheless, I disagree and argue that modification of the Corn Laws was reforming as prices at which foreign corn could be ...read more.

All in all, it is argued by many critics of Lord Liverpoo. that the reforms passed at the time were significant for that particular time and by modern standard, were not very reforming. Nevertheless I disagree with this and believe that what matters is the effect that the reforms had on the people that had to endure them. It is unfair to compare the severity of the reforms in a then-now style as the situation of living is a lot different nowadays. Furthermore, those who argue that very little reforms helped the working class are exaggerating as reforms were put into place to help to lower classes, albeit not as much. For example, the allowing of Trade Unions in 1825 was a very important step for the working class who now had support and a voice. It is for these reasons along with those listed throughout my essay that I argue that Lord Liverpool?s government was a reforming one between this time period, to a large extent as a lot was changed/achieved in a small amount of time that benefited the country as a whole. ...read more.