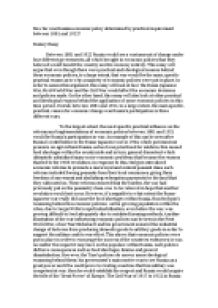 How far was Russian economic policy determined by practical requirements between 1881 and 1922?

﻿How far was Russian economic policy determined by practical requirement between 1881 and 1922? History Essay Between 1881 and 1922 Russia would see a vast amount of change under four different governments, all which brought in economic policies that they believed would benefit the country and its economy entirely. This essay will argue that even though there were practical and ideological reasons behind these economic policies, to a large extent, that war would be the main, specific practical reason as to why a majority of economic policies were put in place. In order to assess this argument, this essay will look at how the Russo-Japanese War, First World War and the Civil War would affect the economic decisions and policies made. On the other hand, this essay will also look at other practical and ideological reasons behind the application of some economic policies in this time period. Overall, between 1881 and 1921, to a large extent, the main specific, practical, reason for economic change was Russia?s participation in three different wars. To the largest extent, the most specific practical influence on the reforms and implementations of economic policies between 1881 and 1921 would be Russia?s participation in war. An example of this can be seen after Russia?s contribution to the Russo-Japanese war in 1904, which put immense pressure on agricultural Russia, as food was prioritised for soldiers; this caused food shortages within the countryside and in turn, general discontent which ultimately subsidized many socio-economic problems that became the reasons that led to the 1905 revolution. ...read more.

Such policies included, introduction of the Peasant Land Bank applied in 1884 to give peasants the financial incentive to travel to Siberia where they could purchase cheaper land which was available for settlement and produce more sought after agricultural goods, such as dairy products. Other policies included the creation of the Zemstvas, who were local elected councils who could provide the peasants with information on crop rotations, fertilisers and financial arrangements; this was important to increase agricultural output because peasants lacked the appropriate education to farm efficiently. Thus, Alexander III also supported education for the peasants, in church schools and later state schools, in order to produce an educated and efficient breed of peasants. These policies were put in place in order to compensate for the lack of industry with a more efficient and productive system of agriculture. Alexander, despite the need for economic development within Russia, from ideological perspective, could of felt particularly pressured to implement such policies by other European countries, such as Britain or France, who by this time seemed to be developing their industry at a far greater pace than Russia. Sergei Witte, between 1892 and 1903 introduced many economic reforms and policies that would later be known as the ?Great Spurt? or the ?Witte System?. Witte implemented policies that encouraged the production of capital goods; promoted the state to support industry as a whole and most importantly, he secured investments from foreign countries. ...read more.