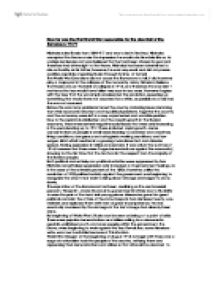 How far was the First World War responsible for the downfall of the Romanovs 1917?

How far was the First World War responsible for the downfall of the Romanovs 1917? Nicholas ruled Russia from 1894-917 and was to be its final tsar. Nicholas accepted the throne under the impression he would rule his whole life as its undisputed leader as it was believed that he had been chosen by god and therefore had divine right to the throne. Nicholas had been determined to rule as harshly as his father; however, he was very weak and did not posses qualities capable of guiding Russia through its time of turmoil. The World War One alone did not cause the Romanovs to fall, it did however play a major part in the collapse of the monarchy. Many historians believe that Russia was on the brink of collapse in 1914, and therefore the war didn't matter as the tsar would have fallen very soon in any case. However I agree with the view that the war simply accelerated the revolution, speeding up something that would have not occurred for a while, or possibly no at all, had the war not occurred. Before the war many problems faced the country, including issues stemming from their economic situation and he political problems. ...read more.

Economic troubles began in 1914 when the government suspended the ability to convert rubles into gold and gave the treasury permission to print paper money without any regard to the amount of gold that was in the vaults in order to repay loans and pay for the war. As a result, there was the huge issue of uncontrollable inflation. Inflation did not hurt the peasants too much as they controlled the food. They hoarded what grain that they produced, and were reasonably comfortable. In contrast, inflation was very much felt by those who lived in the cities, and it hurt. As more were being printed and as inflation rose the actual value of the wages dropped from 85.5 gold rubles 1913 to 38 gold rubles in 1917. Prices increased with inflation, and many people could not afford to buy what little food was available. Long bread lines formed in the cities. Large numbers of poor people waited in line for hours in the cold to purchase a little bit of bread. The output for the national market suffered with the emphasis on war goods. There was little a peasant could buy and the shortage of goods prompted the farmers store their food. ...read more.

The Duma had only begun to work in such a way as to take power away from the government, revolutionary groups were weak as they had been penetrated heavily by the police, and the Tsar could still rely on the army to put down any disturbances. The war, however, changed that. Though there was a brief period of relative calm, anti-Tsarist feelings began to arise again after situations on the home and real fronts, including losses and the lack of food and consumer goods, became increasingly prevalent. It was not only the workers, students, and revolutionaries: there was no group that wanted the Tsar to stay. The economic problems faced by Russia were certainly not around before the war, and they had huge effects. During the course of the war the Duma had begun to take power away from the government. Revolutionaries began to provoke the population even more, eventually bringing about the strikes and demonstrations of February and March 1917. In addition, the Tsar could no longer count on his army for support in suppressing the population, as moral dropped lower with each recurring defeat. They no longer wanted to fight and showed this by joining with others who did not want the government to remain in power. Therefore it can be concluded that the revolution was accelerated by the First World War. By Bethany Brandon Blatch ...read more.