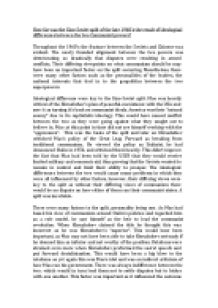 How far was the Sino-Soviet split of the late 1960s the result of ideological differences between the two Communist powers?

﻿How far was the Sino-Soviet split of the late 1960?s the result of ideological differences between the two Communist powers? Throughout the 1960?s the fracture between the Soviets and Chinese was evident. The newly founded alignment between the two powers was deteriorating so drastically that disputes were resulting in armed conflicts. Their differing viewpoints on what communism should be may have been an important factor on the split occurring. Nonetheless, there were many other factors such as the personalities of the leaders, the national interests that tied in to the geopolitics between the two superpowers. Ideological difference were key to the Sino-Soviet split. Mao was heavily critical of the Khrushchev?s plan of peaceful-coexistence with the USA and saw it as turning it?s back on communist ideals. ...read more.

A split was inevitable. There were many factors to the split, personality being one. As Mao had based his view of communism around Stalin?s policies and regarded him as a role model, he saw himself as the heir to lead the communist revolution. When Khrushchev claimed the title he thought this was incorrect as he was Khrushchev?s ?superior?. This would have been important, as Mao may not have been able to take Khrushchev seriously if he deemed him as inferior and not worthy of the position. Relations were strained even more when Khrushchev preformed the secret speech and put forward destalinization. This would have been a big blow to the relations as yet again this was Mao?s idol and was an indirect criticism of how Mao ran his government. ...read more.

Both claimed rights over this region however it was the USSR who had military bases in this area. This led to a few skirmishes. China wanted to assert its influence and prove itself as a world power. Naturally the USSR wanted to stop this, as it would have been directly threatened. They had come into direct action and could not turn back now. In conclusion, all factors are important to understand why the Sino-Soviet split occurred. Ideological differences were the primary cause for disagreement between the two superpowers as they criticised each other on both domestic and foreign policy. This was influenced by their personalities and who they wanted to become. And the final factor, national interests, led them to a direct conflict in which they then parted ways and into the arms of the USA. They were both fighting for the existence of communism but could not co-exist. ...read more.