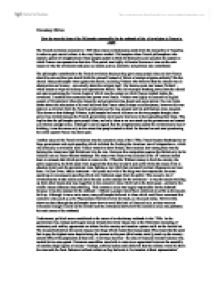 How far were the ideas of the &quot;Philosophes&quot; responsible for the outbreak of the of revolution in France in 1789?

How far were the ideas of the Philosophe responsible for the outbreak of the of revolution in France in 1789? The French revolution occurred in 1789 where many revolutionaries took down the monarchy in Versailles in order to gain crucial reform in the way France worked. Philosophes where French philosophers who started a period of enlightenment where people started to think for themselves and question the system to which France was operated as that time. This period was highly influential however it was not the sole reason to why the revolution took place as factors such as economic and political also contributed. The philosophe contributed to the French revolution because they gave many people ideas on how France should be run and that you should think for yourself instead of follow a 'corrupt religious authority' like the church. Many philosophe were against the church, including Voltaire who believed that the church was all about power and money - not actually about the religion itself. His famous quote was 'erasez l'infame' - which meant to wipe out infamy and superstitious beliefs. This led to people breaking away from the church and start questioning the 'Ancien Regime' which was the system to which France worked before the revolution. ...read more.

Marie Antoinette - the queen and wife of the king was also responsible for mass spending on unnecessary spending which only furthered anger from the public. This caused a lot of revolutionaries to take action and could be seen as the catalyst for the revolution - it was the tension building up from other factors that was magnified in the economic crisis which led to the third estate - primarily the middle classes (Marxist idea) rebelling. This economic crisis was hugely responsible for the outbreak because it was the catalyst for the outbreak - without it, people would have continued to suffer as the tension built up. Although it was a main cause, many philosophe believed in ideas which could have countered this economic crisis such as a the Physicocrats who believe din fair trade, an idea used today. However this shows us that although the philosophe knew how to avoid this kind of financial ruin, as they were not influential enough it could not be avoided and this ultimately shows how the economic crisis was probably the main cause of the outbreak. Furthermore, political errors contributed to the cause of revolutionary outbreak in the 1780s. ...read more.

The disorganisation and outbreak of nobilities were also responsible for this revolution. Overall many factors contributed to the French Revolution in the 1780s. The enlightenment meant that many philosophe were having a lot of influence of the way regarded the way France was run at that time, and they started to think for themselves. There was also an huge economic crisis which included the France becoming bankrupt due to huge government spending on war and on the royals. The inequality between people was also a catalyst for revolution and the political errors made by the King and assemblies meant that people were unhappy about the way France was run. Although the philosophe had many great ideas to how France should have been run, they remained as only ideas as their influence was only strong enough to get people thinking about reform and not actually take action as the government could easily remove threat form select few individuals and not large masses of people. Therefore the philosophe were only responsible for the revolution to a certain extent as many other factors were the true catalysts for the outbreak. But without this period of enlightenment many believe that the revolution may have no occurred until much later therefore the philosophe did have influence just not enough to cause immediate action until other factors occurred much later. Kirandeep Dhillon ...read more.