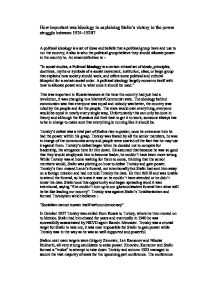 How important was Ideology in explaining Stalins victory in the power struggle between 1924-1928?

How important was Ideology in explaining Stalin's victory in the power struggle between 1924-1928? A political ideology is a set of ideas and beliefs that a political group have and use to run the country, it also is who the political group believe they should allocate power in the country to. An exact definition is :- "In social studies, a Political Ideology is a certain ethical set of ideals, principles, doctrines, myths or symbols of a social movement, institution, class, or large group that explains how society should work, and offers some political and cultural blueprint for a certain social order. A political ideology largely concerns itself with how to allocate power and to what ends it should be used." This was important in Russia because at the time the country had just had a revolution, it was changing to a Marxist/Communist state. The ideology behind communism was that everyone was equal and nobody was better, the country was ruled by the people and for the people. The state would own everything, everyone would be equal in nearly every single way, Unfortunately this can only be done in theory and although the Russians did their best to get it to work, someone always has to be in charge to make sure that everything is running like it should be. ...read more.

The conference then denounced Trotsky and Trotskyism in January 1924, demoting many of Trotsky's followers. In 1925 the "troika" began to deteriorate, Stalin allied with Bukharin and Rykov (Soviet Prime Minister), where as Zinoviev and Kamenev allied with Lenin's widow, Nadezhda Krupskaya, and Grigory Sokolnikov who was a non voting politburo member. The September 1925 meeting was a crushing blow from Stalin against Zinoviev, with only the Leningrad delegation behind them and the majority with Stalin and his allies. Although Zinoviev was elected into the politburo, Kamenev was demoted to a non-voting member where as Sokolnikov, another ally was dropped totally out of the picture. The next move for Zinoviev and Kamenev was an alliance with Trotsky, this was the beginning of the end for the pair. They formed the United Opposition which consisted of their followers and a few other minor groups amongst the part. Stalin wrote a letter to Molotov asking all of his allies to target Zinoviev. Zinoviev was dismissed from the Politburo after a Central Committee meeting in July 1926. Then the office of the Comintern Chairman was abolished and Zinoviev lost his last important post. He stood firm in opposing Stalin and was soon enough abolished from the Central Committee, soon after Kamenev and the leading members of the United Offensive were also removed from the committee. ...read more.

Stalin changed the country from agricultural to industry by moving a lot of the farmers over into the factories. Although Stalin saw himself as a Marxist, he broke some of the fundamental rules and started and adaptation of the theory. Lenin had already made an adaptation of Marxism by skipping the stage feudalism and forced a revolution rather than waiting for it to happen. When Lenin was in rule he ran the country under a Marxist-Leninism ideology. Being seen as one of the founders of true communism Stalin decided to keep Lenin's ideas but only Stalin's interpretations on them. Stalin went against Trotskyism mainly because of Trotsky's view on the peasants, Trotsky wanted urban insurrection and not peasant-based guerrilla warfare. Stalin's ideology was not Marxist, it was a mere adaptation of what Marxism was and it was known as Stalinism. When leading up to power he removed most of his key opponents for practical rather than ideological reasons. Although Trotsky was removed for being the biggest threat and for going against Stalins and the general parties idea. Stalin all the way through his rise to power allies with the strong and see's how things play out, this was crucial to him gaining power as he eventually gained power through waiting until he picked his spot. He allied with the right people and fought off anyone who attempted to oppose him at the end of his campaign to rise to power. ...read more.