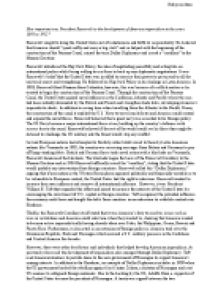 How important was President Roosevelt to the development of America imperialism in the years 1895 to 1912?

﻿Robyn Ashton How important was President Roosevelt to the development of America imperialism in the years 1895 to 1912? Roosevelt sought to bring the United States out of isolationism and fulfil its responsibility. He believed that America should ?speak softly and carry a big stick? and so helped with the beginning of the construction of the Panama Canal, coined the term Dollar Diplomacy and issued a ?corollary? to the Monroe Doctrine. Roosevelt introduced the Big Stick Policy, the idea of negotiating peacefully and acting like an international police whilst being willing to use force to back up any diplomatic negotiations. It was Roosevelt?s belief that the United States was justified to exercise their power to put an end to all the universal unrest and wrongdoing. He followed his Big Stick Policy in his dealings in Latin America. In 1903, Roosevelt freed Panama from Colombia, however, this was because of a selfish motive as he wanted to begin the construction of the Panama Canal. Through the construction of the Panama Canal, the United States gained naval influence in the Caribbean, Atlantic and Pacific where the seas had been initially dominated by the British and French and strengthen trade links, developing America?s imperialistic ideals. ...read more.

Thirdly, the Roosevelt Corollary itself stated that it was America’s duty to resolves issues such as wars or revolutions and America could intervene when they wanted to, showing that America wanted to become active imperialistically having already taken over Cuba, the Philippines, Guam, Hawaii and Puerto Rico. Furthermore, it also acted as an extension of foreign policy as America took over the Dominican Republic, Haiti and Nicaragua which ensured a U.S. military presence in the Caribbean and Central America for decades. However, there were other key factors and individuals that helped develop American imperialism. As previously discussed the development of imperialism also emerged through Dollar Diplomacy. Taft used American bankers to provide loans to the new government of Nicaragua to support America’s mining interests. In addition to the Honduras, an example of Dollar Diplomacy includes in 1909 when the US government backed the rebellion against José Santos Zelaya, a dictator of Nicaragua and sent US marines to safeguard foreign nationals. Due to the backing by the US, Adolfo Díaz, a supporter of the United States became the president of Nicaragua. ...read more.

Theodore Roosevelt accelerated expansionism the imperialism was partly influenced by the ?Civilising Mission? and ?Social Darwinism?. The former idea emerged with the European imperialist ideologies. For the racial and cultural superiority, there was a need for the US to raise up non-white societies from their ?backwardness?. It was also claimed that this was the responsibility of America to conquer weaker nations as they were not fit to the world and at the same time, strong nations survived. The America, therefore, had an excuse to intervene other countries such as Cuba, Colombia and China and achieved imperialism completely. After Theodore Roosevelt was elected as the president, there had already been an elementary background of imperialism, which made a lot easier for Roosevelt to continue and implement. Theodore Roosevelt was essential for the development of American imperialism in terms of intervention to weaker nations, Panama Canal Project and Roosevelt Corollary. After his presidency, expansionism was continued by the next Republican president William Taft, who became the president in 1908. The Platt Amendment set out by the Congress and John Hay?s Open Door policy also contributed to develop the imperialism. Thus, Roosevelt was significant, but not the only factor. ...read more.