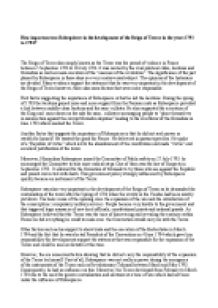 How important was Robespierre in the development of the Reign of Terror in the years 1793 to 1794?

﻿How important was Robespierre in the development of the Reign of Terror in the years 1793 to 1794? The Reign of Terror also simply known as the Terror was the period of violence in France between 5 September 1793 to 28 July 1794. It was incited by the rival political clubs, Jacobins and Girondins as well as mass execution of the ?enemies of the revolution?. The significance of the part played by Robespierre in those days is a very controversial subject. The opinions of the historians are divided. Many evidence support the statement that he was very important in the development of the Reign of Terror however, there also some factors that were more responsible. First factor suggesting the importance of Robespierre is that he led the Jacobins. During the spring of 1793 the Jacobins gained more and more support from the Parisian mob as Robespierre provided a link between middle-class Jacobins and the sans -cullotes. ...read more.

It allowed for the formation of tribunals to try those who are against the Republic and punish convected with death. This government policy strongly influenced by Robespierre quickly became an instrument of the Terror. Robespierre was also very important in the development of the Reign of Terror as he demanded the continuation of the terror after the Spring of 1794 when the revolts in the Vendee had been mostly put down. The basic cause of the uprising were the expansion of the war and the introduction of the conscription ( compulsory military service). People became very hostile to the government and that triggered huge massacre of new local officials, constitutional priests and national guards. As Robespierre believed that the Terror was the time of discovering and revealing the enemies within France he did everything he could to make sure the Convention would carry on with the Terror. ...read more.

In addition to this, the dismissal of the Girondins was forced by the power of sans ? cullotes. This may be seen as rising radicalism behind the Terror rather than the influence of Robespierre. Furthermore, there were many other influential leaders such as Couthon and St Just who might have played equally big role in development of the Terror as Robespierre. Couthon played important role in the development of the Law of Prairial and St Just spread the movement of the execution of Louis and drafted the constitution of 1793. All in all, the Reign of terror was undoubtedly influenced by Robespierre but it is important to know that there were many other factors that played very important role in the expansion of the terror such as other leaders and the timing of the war. In my opinion, Robespierre was important to the reign terror but he was not the only influence on its establishment as the terror continued after Robespierre's execution on 28 July 1794. ...read more.