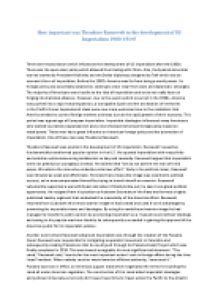 ﻿How important was Theodore Roosevelt to the development of US Imperialism 1900-1914? There were many factors which influenced the development of US imperialism after the 1980s. There was the open-door policy which allowed free trading with China. Also, the Spanish-American war led started by President McKinley and the Dollar diplomacy designed by Taft which was an economic form of imperialism. Before the 1980?s America was far from being a world power. Its foreign policy was essentially isolationist, seeking to steer clear from wars and diplomatic entangles. The majority of Americans were hostile to the idea of Imperialism and were not really keen on forging international alliances. However, due to the events which occurred in the 1980s, America was pushed into a rapid naval expansion; a war against Spain and the annexation of territories in the Pacific Ocean. Expansionist ideas were now more welcomed due to the realisation that America needed to control foreign markets overseas due do the rapid growth of their economy. This period was a great age of European Imperialism. ...read more.

This was viewed as arguably his most significant achievement. "The canal," Roosevelt said, "was by far the most important action I took in foreign affairs during the time I was President. When nobody could or would exercise efficient authority, I exercised it." Panama was now in effect, an American puppet state which negotiated the terms for building the canal all under American regulation. The construction of this canal aided imperialist ideologies and policies immensely as not only did it save travel time to travel across the Pacific to the Atlantic to boost commerce it enabled America?s navy to travel across in a much shorter period from the distance of approximately 13,600 to 5,600 miles. This strengthened America?s navy power as it meant more ability to control and expand its naval forces and as far as Roosevelt was concerned a great navy was essential to his foreign policy and without the canal rest of his foreign policy would not fall into place. However, there were other key factors and individuals which helped develop and advance imperialism. ...read more.

Yes, although with the case of the Panama Canal - it was initiated by the French, Roosevelt managed to successfully push through and supervise the project. Teddy Roosevelt formally altered U.S. foreign policy once he became president, but the most significant changes occurred long before he ever took the Oath of Office. In 1904, the Roosevelt Corollary to the Monroe Doctrine made America the police of Latin America. This policy gave the U.S. exclusive rights to intervene in Latin American countries, ostensibly to ensure their stability. Roosevelt is also famous for his "big stick" diplomacy which America still uses today. Even though, there were other factors which encouraged imperialism and there were other individuals who exercised their expansionist ideologies and policies in different methods such as Taft, it was Roosevelt who initially transformed public opinion which gained support for imperialism. Without this transformation of public opinion I highly doubt that other future presidents would have pushed through with their imperialist ideologies and even if they had they would have found it very difficult to win over public support for their policies. ...read more.