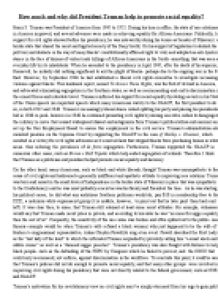 How much and why did President Truman help to promote racial equality?

﻿How much and why did President Truman help to promote racial equality? Harry S. Truman was President of America from 1945 to 1952. During his time in office, the state of race relations in America improved, and several advances were made in achieving equality for African-Americans. Politically, his support for civil rights showed before his presidency; he was noteworthy during his tenure as Senator of Missouri ( a border state that shared the racist and bigoted society of the Deep South) for his support of legislation to abolish the poll tax( and obstacle in the way of many blacks? constitutionally affirmed right to vote) and adopted an anti-lynching stance in the face of dozens of violent mob killings of African-Americans in the South- something that was seen as everyday life by its inhabitants. When he ascended to the presidency in April 1945, after the death of his superior, Roosevelt, he initially did nothing significant to aid the plight of blacks- perhaps due to the ongoing war in the Far East. However, by September 1946 he had established a liberal civil rights committee to investigate increasing violence against blacks. This landmark report, named To Secure These Rights, was the first of its kind in America, and advocated eliminating segregation in the Southern states, as well as recommending and end to discrimination in the armed forces and interstate travel. ...read more.

Frequently, the sensitivity of the race issue was broken and often spilled out to the public- one famous example would be when Truman?s wife refused a black woman( who just happened to be the wife of Harlem?s congressional representative, Adam Clayton Powell)to sing at an event. Powell described the First Lady as the ?last lady of the land? to which the infuriated Truman responded by privately calling him ?a smart aleck and a rabble rouser? as well as a ?damned nigger preacher?. Truman?s presidency was also fraught with failures to help black people- such as the defunding of the FEPC by Congress which he failed to prevent, and the CGCC that could only recommend, not enforce, against discrimination in the workforce. To conclude this point, it could be said that Truman?s policies did not do enough to promote racial equality, and that many other groups were involved in improving civil rights during his presidency that were not directly related to the federal government, such as CORE and NAACP. Truman?s motivation for his revolutionary view on civil rights may?ve simply stemmed from his urge to gain political power, therefore making it questionable if he truly believed in civil rights and revealing his cynicism. During the late 40s, it was clear that the importance of the black vote was becoming more and more prevalent. ...read more.

Truman was desperate to reinforce America?s role to the world as the self-proclaimed champion of freedom and democracy, in order to persuade countries to turn away from communism to capitalism. He knew such things would be hypocritical if only citizens of a particular ethnicity enjoyed full civil rights in America. In short, Truman did what he did through a sense of moral obligation and duty to protect African-Americans from racism and to preserve America?s reputation among the international community. In conclusion, Truman?s administration saw revolutionary advances in black civil rights and he played a crucial and decisive role to help solve discrimination through his power as President and spurned America as a whole to pursue racial equality- indeed, some historians would say that his administration was the birth of the Civil Rights Movement. Despite this, it was clear that many things that could?ve been done were not and millions of African- Americans still faced widespread de jure and de facto racism and bigotry by the end of his presidency in 1952. However, this could not be completely be attributed to Truman?s apathy and his ambivalence towards African-Americans in general, as many Americans (Republicans, Dixiecrats etc.) were strongly against such concepts as racial integration and the President, as a rule, cannot have too much power to solve these problems- it was up to all the states in the union and all Americans to realize discrimination against African-Americans and work against it, not just the federal government in Washington D.C. ...read more.