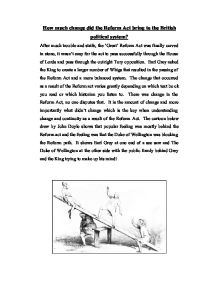 How much change did the Reform Act bring to the British political system?

How much change did the Reform Act bring to the British political system? After much trouble and strife, the 'Great' Reform Act was finally carved in stone, it wasn't easy for the act to pass successfully through the House of Lords and pass through the outright Tory opposition. Earl Grey asked the King to create a larger number of Whigs that resulted in the passing of the Reform Act and a more balanced system. The change that occurred as a result of the Reform act varies greatly depending on which text book you read or which historian you listen to. There was change in the Reform Act, no one disputes that. It is the amount of change and more importantly what didn't change which is the key when understanding change and continuity as a result of the Reform Act. The cartoon below drew by John Doyle shows that popular feeling was mostly behind the Reform act and the feeling was that the Duke of Wellington was blocking the Reform path. It shows Earl Grey at one end of a see saw and The Duke of Wellington at the other side with the public firmly behind Grey and the King trying to make up his mind! ...read more.

Voting in the boroughs was restricted to men who occupied homes with an annual value of �10. There were also property qualifications for people living in rural areas. As a result, only one in seven adult males had the vote. Nor were the constituencies of equal size. Whereas 35 constituencies had less than 300 electors, Liverpool had a constituency of over 11,000. However, there was much continuity as a result of the Reform Act. The act failed to rid parliament of corruption because it still didn't introduce a secret ballot, some may argue that corruption even grew after 1832. An important immediate effect of the Reform Act was the Whig political gain (post reform). The number of Whig MP's increased because the rotten boroughs which were mostly Tory were abolished in the 1832 Reform Act which then eliminated Tory strong-holds, very convenient for the Whigs! Still only 1 in 5 men could vote, as there were limitations on men with a low property value or a low wage. The Aristocracy still dominated parliament and despite some successful seat redistribution, the number of seats still didn't correspond to population one historian presented the glum Marxist ...read more.

had the act had to keep the Laissez Faire policy favoured by the Tory party and right wing MP's like the Duke of Wellington who remarked in a letter to the Duke of Buckingham three weeks after the Reform act passed: "It is not in my power to prevent the consequence of the mischief which has been done. The Government of England is destroyed." This was an extreme and very melodramatic view taken by the Duke but some other Tories had adopted this viewpoint. And on the other side of the spectrum there were the radical reformers who were not content with the 1832 Reform act as they wanted more reform and were scared that it would be the only reform to happen. The reform act was the first domino to fall in a long line of dominos that would eventually democratise parliament, but the working class of 1832 could not look at the act with high and sight and could not see the further reforms that would happen. The 1832 Reform act went far enough as to quell voices of revolution and reform yet the Government still had many problems to sort out. ...read more.