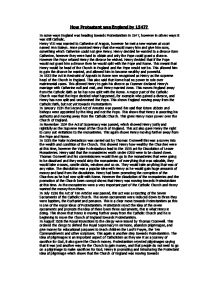 How Protestant was England by 1547

How Protestant was England by 1547? In some ways England was heading towards Protestantism in 1547, however in others ways it was still Catholic. Henry VIII was married to Catherine of Aragon, however he met a new women at court named Ann Boleyn. Anne promised Henry that she would marry him and give him sons, something which Catherine could not give Henry. Henry decided he wanted to a divorce form Catherine, however they were hard to obtain and only the Pope could grant a divorce. However the Pope refused Henry the divorce he wished. Henry decided that if the Pope would not grant him a divorce then he would split with the Pope and Rome. This meant that Henry would be head of the Church in England and the Pope would not be. This allowed him to gain the divorce he wanted, and allowed him to become wealthy and powerful. In 1533 the Act in Restraint of Appeals to Rome now recognised as Henry as the supreme head of the Church in England. This also said that Rome had no power to rule over matrimonial cases. This allowed Henry to gain his divorce as Cranmer declared Henry's marriage with Catherine null and void, and Henry married Anne. ...read more.

This ordered the clergy to defend the Royal Supremacy in sermons, abandon pilgrimages, and give money for educational purposes to teach children the Lord's Prayer, the Ten Commandments and other scriptures. This again is another step towards Protestantism. The idea of pilgrimages is an important aspect of Catholicism as they see it as a journey of sacrifice for God, it also gave the Church money. Protestantism rejected pilgrimages saying that it was just another way for the Church to gain money, and that people do not need to go on a pilgrimage to make sacrifices for God. Henry is promoting and introducing the Protestant idea of pilgrimage which shows that the Church of England was moving towards Protestantism. The other injunction was that people should give money for educational purposes. Protestantism encouraged education and encouraged people to learn things like how to read the Bible or say the lords prayer, as they thought it was important for people to be educated. However Catholicism did not want people to learn as they were afraid that people would start questioning things and that people would stop supporting Catholicism. This shows another way that Henry is moving towards Protestantism as he is encouraging people to learn the Lord's prayer, the ten commandments and other scriptures. ...read more.

This is a move towards Protestantism as the monasteries were so important to the Catholic faith. In July 1540 Thomas Cromwell was executed, which shows that Henry may have listened to the rebels that were involved in the pilgrimage of grace. In May 1548 the act for the advancement of true religion was passed which restricted the access of the English Bible to the upper classes. This moves England towards Catholicism again as Catholics only wanted the upper class people to be able to learn and read the Bible. They did not wish for the lower class to be educated. It would seem that although England moved towards Protestantism in Henrys reign by 1547 England was not entirely Protestant however it was also not entirely Catholic. The Church was somewhere in the middle with both Protestant and Catholic ideas involved. Henry was still committed to certain aspects of Catholicism like transubstantiation. However he also liked the idea of the dissolution of the monasteries and banning pilgrimages. However the dissolution may have just been a way for Henry to gain money and land, which is what he gained from the monasteries, and this may have been his reason for the dissolution. In conclusion by 1547 England was neither Protestant or Catholic, it was somewhere in the middle. ?? ?? ?? ?? ...read more.