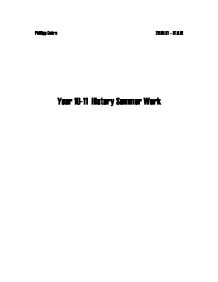 Phillipp Cohrs 20.06.01 - 01.9.01 Year 10-11 History Summer Work Topic 6 : How secure was the USSR's control over E.Europe,1948-89? Why was the Berlin Wall built in 1961? The Berlin Wall was built to stop the people of East Berlin to escape to West Berlin, where there was no communism. Some of the people that lived in East Berlin feared the Communist control, and therefore wanted to escape to West Berlin or West Germany, because it wasn't communist, but others tried to emigrate because of economic reasons. To stop the communist's thought they should build a wall to stop the people crossing over, and anyone that tried to flee got shot. The result of building the wall was obvious, families got separated; West Berliners had a better life style than east citizens. Berliners were unable to go to work, and all this was followed by a total chaos. A lot of deaths were recorded of people trying to cross the wall. Question 3 PG 315 I think that the upper picture, (the one where there are people shopping) is in West Germany, because the economy was better in West Berlin than in the eastern part. I came to this conclusion because the picture below it shows old buildings in the background and people walking behind some bushes, this picture does not look civilized, and therefore I think the bottom picture is East Berlin. Why did the Cold War "thaw" in the 1970's? 1. End of Vietnam war 2. Both the USSR and the USA had improved relations with China. 3. American astronauts and Soviet cosmonauts met up and shook hands in space. This was quite literally the high point of d�tente. 4. Helsinki conference August 1975. All countries recognised the borders set out after the Second World War, including the division of Germany. They agreed to respect human rights - freedom of speech, freedom to move from one country to another. ...read more.

* Finally the Soviet Union tolerated events in Poland only because it could not do anything else. Solidarity had gained support in the West in a way that neither of the Hungarian or Czech risings had. Walesa was regularly interviewed and photographed for the Western media. Solidarity logos were bought in their millions as posters, postcards, even car stickers throughout the capitalist world. The scale of the movement and the charismatic appeal of Lech Walesa ensured that the Soviet Union treated the Polish crisis cautiously. Why did the Polish government clamp down on Solidarity in December 1981? * There were increasing signs that Solidarity was acting as a political party. The government had been sent secret tapes of a Solidarity meeting at which the leaders talked of Solidarity setting up a new provisional government - without the Communist Party. This formed a direct challenge to the Soviet plan for Eastern Europe. Brezhnev was not prepared to have a Communist Party within the Soviet block dictated to by an independent union. * Poland was sinking into Chaos. Meat and fish supply was down by 25%. Almost all Poles felt the impact of food shortages. Rationing was introduced in April 1981. National income had fallen by 13 % in a year, industrial production by 11 per cent and foreign trade by 20 per cent. Wages had increased by less than inflation. Unemployment was rising. Strikes were continuing long after the Solidarity leadership had ordered them to stop. * Solidarity itself was also tumbling into chaos. There were many different factions. Some felt that the only way to make pressure was to push the Communists harder until they cracked under the pressure. Against the advice and better judgement of Walesa, they passed a motion at their October 1981 Congress to "issue a statement of sympathy and support for all the downtrodden peoples of the Soviet block and to all the nations of the Soviet Union". ...read more.

This shows that many people liked Gorbachev's ideas but they didn't think that he would be able to convert these plans into realism. How did Gorbachev's reforms in the Soviet Union affect Eastern Europe? Gorbachev's reforms had created a demand of freedom in the communist countries. Eastern Europe leaders were boggled because now Gorbachev supports the ideas that the soviet wanted to destroy 20 years earlier in the Czech region. Now Gorbachev told the leaders that they should listen to what their population says. The result was the collapse of communism in eastern Europe. Timeline 1989 May Hungarians begin dismantling the barbed wire fence between Hungary and non-Communist Austria. June In Poland, free elections are held for the first time since the Second World War. Solidarity wins almost all the seats in the contests. Eastern Europe gets its first non-Communist leader. The cracks in the soviet domination of Eastern Europe begin to appear and the complete collapse of the Red Empire begins with the people of East Germany. September Thousands of East Germans on holiday in Hungary and Czechoslovakia refuse to come home. They escape through Austria into West Germany. October There are enormous demonstrations in East German cities when Gorbachev visits the country. He tells the East German leader Erich Honecker to reform. Honecker orders troops to fire on demonstrators but they refuse. Gorbachev makes it clear that Soviet tanks will not move in to ''restore order''. November East Germans march in there thousands of checkpoints at the Berlin Wall. The guards throw down their weapons and join the crowds. The Berlin Wall is dismantled. There are demonstrations in Czechoslovakia. The Czech Government opens their borders with the West, and allows the formation of other parties. December In Romania there is a short but very bloody revolution, which ends with the execution of Communist dictator Nicolae Ceausescu. The Communist Party in Hungary renames itself the Socialist Party and declares that free elections will be held in 1990. In Bulgaria, there are huge demonstrations against the Communist government. March (1990) Latvia leads the Baltic republics in the declaring independence from the USSR. ...read more.