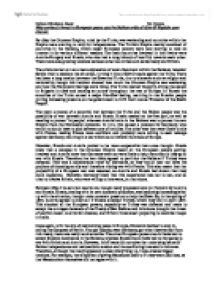 How serious a threat to European peace was the Balkan crisis of 1875-8? Explain your answer.

How serious a threat to European peace was the Balkan crisis of 1875-8? Explain your answer. By 1875 the Ottoman Empire, ruled by the Turks, was weakening and countries within the Empire were starting to rally for independence. The Turkish Empire mainly consisted of countries in the Balkans, which major European powers were now starting to take an interest in for various different reasons. The main countries involved in this rivalry were Austria-Hungary and Russia, who also had a long history of hostility towards each other. There were also growing tensions between other countries such as Germany and Britain. The crisis started out as a mere expression of local discontent within the Balkans; however Serbia tried to escalate the situation, turning it into a Slav Crusade against the Turks. There had been a long tension between the Slavs and Turks, due to elements such as religion and nationality; though this incident showed how much the Ottoman Empire was weakening and how the Nationalist feelings were rising. ...read more.

Therefore the two rivals agreed to partition the Balkans if Turkey were defeated. This was a considerable relief for Germany, as they would now not have the problem of choosing an ally and therefore risking war with France. This also meant that the probability of a European war was lessened, as Austria and Russia had shown that they could cooperate. However, Germany knew that this cooperation was not to last, and so tried to involve Britain, who were willing to intervene, but not alone. Between 1875-7 no solution was found, though many proposals were put forward by Austria and Russia. Russia, dealing with its own domestic problems, was becoming increasingly fed up with the situation, though under constant pressure to help the Slavs. So, in the spring of 1877, Austria agreed to stay out if Russia attacked Turkey, which they did in April 1877. This shocked all the European powers, especially as Turkey was defeated and made to accept the outrages demands of the Treaty of San Stefano and this alone brought the threat of conflict closer. ...read more.

Also, Russia's arrogance towards the new Russian state of Big Bulgaria eventually led to another Balkan crisis in 1885. However, Bismarck was not to blame for these outcomes, as he was happy for the Balkans to be equally divided East and West between Russia and Austria, though this was clearly not possible. In conclusion, though the Treaty of Berlin solved many of the immediate problems in Europe, it caused a lasting bitterness between the major powers, especially towards Germany. The resulting allies that Germany gained, such as with Italy and the renewed Dreikaiserbund, seemed promising, however did not help to solve the growing tensions in Europe, especially between Austria and Russia. The crisis itself, though showing that some rival countries could work together in times of crisis, actually worsened relations in Europe due to bad handling and procrastination. There seemed only to be temporary solutions to problems, which were quickly established but bound to fall through. In short this crisis was only the beginning of many more, eventually leading to the crisis that began the Great War. ?? ?? ?? ?? Edijana Obiakpani-Guest Mr. Dennis ...read more.