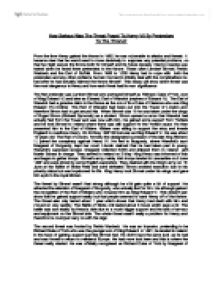 How Serious Was The Threat Posed To Henry VII By Pretenders To The Throne? From the time Henry gained the throne in 1485, he was vulnerable to attacks and threats. It became clear that he would need to move decisively to suppress any potential problems, so that he might secure the throne both for himself and his future dynasty. Henry's resolve was tested when he faced three pretenders to the throne. These were Lambert Simnel, Perkin Warbeck and the Earl of Suffolk. From 1486 to 1506 Henry had to cope with both the pretenders and any other problems he had. He had to initially deal with the complications he had after he had actually claimed the throne himself. This essay will show which threat was the most dangerous to Henry and how each threat had its own significance. The first pretender was Lambert Simnel who portrayed himself as Richard, Duke of York, (son of King Edward IV) and later as Edward, Earl of Warwick (nephew of Edward IV). The Earl of Warwick had a genuine claim to the throne as the son of the Duke of Clarence who was King Edward IV's brother. The Earl of Warwick had been put into the Tower of London and therefore Simon had to get around this. When Simnel was 10 he was taken under the wings of Roger Simon (Richard Symonds) as a student. Simon spread a rumor that Warwick had actually fled from the Tower and was now with him. ...read more.

He tried to take over the city again but his failed as well and he was forced to flee Ireland, chased by four English ships. In 1497, he landed in Cornwall. Warbeck found very little support to try and unsettle Henry and he was now starting to go downhillHe left Cornwall for London and attempted to challenge Henry militarily but he had no chance. He was captured and imprisoned in the Tower of London. The threat posed by Warbeck was stronger than Simnel's but it still lacked an edge. He couldn't gain the amount of support he needed to challenge Henry and therefore he didn't have a chance when he reached London. Warbecks threat was different to Simnels in many ways. He tried to gain more support from abroad as well as from Scotalnd and Ireland. He probably caused more problems than Simnel to Henry because of his International threats. He had gained the support of the Maximillian I and Margeret of Burgundy as well as King James IV of Scotland. He was gaining the support of many Monarchs but they were losing patience with him and this affected him a lot. At the ned of the threat Henry had no problem in defeating Warbeck. Warbeck had gathered together a quick blend of troops and this was no match for Henry's troops. It was almost an insult. The third and final threat was that of the Earl of Suffolk (Edmund de la Pole) whose threat lasted from 1499-1506. ...read more.

He was powerless. The Cornish Rebellion was triggered by demand for money to pay for the campaign to resist the invasion by James IV and Warbeck. The rebels marched to the edge of London where they were met by the King's forces. 1000 rebels were though to have been killed and three main leaders were executed. It was probably a bigger threat than the Yorkshire rebellion because it headed straight for the capital. It was also going on at the same time as the Warbeck affair. These two rebellions didn't really harm Henry's reign and therefore he was still succeedign in his som to secure the throne for future generations. In conclusion it is clear that Henry was dogged by numerous threats throughout his twenty-four year reign. The question is how serious these threats were. The main threat in my eyes was Perkin Warbeck. He seemed to have his claim more planned out and therefore I believe he had the best chance out of the three pretenders of claiming the throne. The most dangerous thing about Warbecks threat was the fact that he had support from abroad and domestically. If he just had domestic support he wouldn't have had much of a chance. He had a mix of both and therefore he could use both to his advantage. I think that people like Maximilian would have threatened Henry and Henry would have been cautious. He would have been careful. I think that Henry was already insecure and this made him even more worried. This is the threat that I thought was more serious than the others. . ...read more.