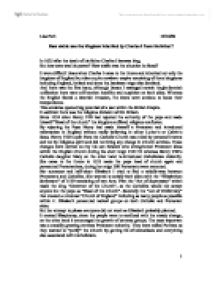 How stable was the kingdom inherited by Charles I from his father?

Lisa Poth 19/10/08 How stable was the kingdom inherited by Charles I from his father? In 1625 after the death of his father Charles I became king. But how save was his power? How stable was the situation he faced? It were difficult times when Charles I came to the throne and inherited not only the kingdom of England but also a quite newborn empire consisting of three kingdoms including England, Ireland and since the Jacobean reign also Scotland. And there was the first issue, although James I managed certain Anglo-Scottish unification there were still ancient hostility and suspicion on both sides. Whereas the English feared a Scottish invasion, the Scots were anxious to loose their independence. This anxieties opened big potential of a war within the British Empire. In addition there was the religious division within Britain. Since 1534 when Henry VIII had rejected the authority of the pope and made himself "Head of the church" the kingdom suffered religious confusion. ...read more.

showed clearly the Catholics, who were discriminated against at least since the violent reign of Mary Stuart, were anything but pleases with the "Elizabethan Settlement". They had hoped that James I would bring back Catholicism. But James I continued Elizabeth religious policy and so disappointed the Catholics, although he and Elizabeth both managed to keep religious trouble to an minimum and stabilize the situation to avoid a religious civil war like in France. But a perfect stabilisation was not achieved yet. The society and economy of Charles I's predecessors were mainly based on agriculture, though some industry existed. On top of the society were the Gentry who also carried out local government, the second social group were the yeomen, independent farmer, followed by the husbandry and at the bottom of society labourers and cottagers. Within this hierarchal system the wealth polarisation grew, because of the high inflation and the increasing food prices. This led to poverty of the lower social groups (husbandmen and labourers) ...read more.

Another controversial point was the impeachment policy of the parliament trough which the MPs could bring the king's ministers to court. But the king saw the choice of his ministers as part of the royal prerogative. On top of parliament's "black list" was George Villiers, Earl of Buckingham and the king's first favourite on whom the whole royal patronage was concentrated. Buckingham was the highest ranking person outside the royal family and parliament was very anxious that the king is influenced by just a single man. The parliament was very dissatisfied about James I's reign besides the fact that he kept dissolving the parliament in case they disagreed with him. Therefore the relation between crown and parliament was about to explode. Altogether the kingdom Charles I inherited was not as stable as he probably would have wished. His father's legacy was an only partly unified kingdom, but a stabilized religious division, a society less stable than after the Tudorian reign, weak financial conditions and an upset parliament. So nothing can been seen as really stable. But the question is: How successful can Charles I handle these issues? ?? ?? ?? ?? 1 ...read more.