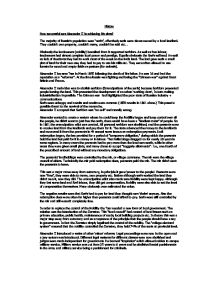 How successful was Alexander II in achieving his aims?

History How successful was Alexander II in achieving his aims? The majority of Russia's population were "serfs", effectively serfs were slaves owned by a local landlord. They couldn't own property, couldn't marry, couldn't be sold etc. . Obviously the landowners (nobility) benefited from it supported serfdom. As well as free labour, landowners had almost complete local power and prestige. Equally obviously the Serfs suffered. As well as lack of freedoms they had to work most of the week on the lords land. The lord gave serfs a small plot of land for their own use, they had to pay to use his mills etc. They were often allowed to use forests for wood and empty fields as pasture (for animals). Alexander II became Tsar in March 1855 following the death of his father. He was 36 and had the reputation as a "reformer". ...read more.

The state advanced the money to the landlords and recovered it from the peasants in 49 annual sums known as redemption payments. Until redemption began, the law provided for a period of "temporary obligation," during which the peasants held the land but paid for it in money or in labour. That initial stage dragged on for nearly 20 years in some regions. In many areas the peasants had to pay more than the land was worth, while in other areas they were given small plots, and many chose to accept "beggarly allotments" : i.e., one fourth of the prescribed amount of land without any monetary obligations. The peasants' landholdings were controlled by the mir, or village commune. The mir were the village council of elders. Technically the mir paid redemption dues, peasants paid the mir. The mir didn't want the peasants to leave. ...read more.

In fact the Zemstvo simply legalised the control of the nobility. The "college electoral system" ensured that the nobility controlled the Zemstvo, they held 74% of the seats at provincial level. Alexander II introduced a series of other 'minor' reforms. Legal proceedings were now in the open and a jury system was introduced. Different legal systems for different classes were now abolished and judges were made independent for government. He banned "loopholes" which allowed nobles to escape military service. Military service was cut from 25 years to 6 years and he abolished brutal punishments in the army and military service being a punishment for criminals. I think that Alexander II did succeed in achieving his aims. Most people would agree that freeing the serfs was morally correct. He also managed to avoid civil war by keeping the nobility and serfs happy with his reforms. Even though serfs remained "tied to the land" until redemption dues were paid, it was still a step in the right direction. ...read more.