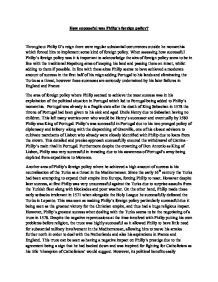 How successful was Philip's foreign policy? Throughout Philip II's reign there were regular substantial occurrences outside he monarchia which forced him to implement some kind of foreign policy. When assessing how successful Philip's foreign policy was it is important to acknowledge the aim of foreign policy seem to be in line with the traditional Hapsburg aims of keeping his land and passing them on intact, whilst adding to them if possible. In line with these aims Philip seems to have achieved a moderate amount of success in the first half of his reign adding Portugal to his lands and eliminating the Turks as a threat, however these successes are seriously undermined by his later failures in England and France The area of foreign policy where Philip seemed to achieve the most success was in his exploitation of the political situation in Portugal which led to Portugal being added to Philip's monarchia. Portugal was already in a fragile state after the death of King Sebastian in 1578 the throne of Portugal had been given to his sick and aged Uncle Henry due to Sebastian having no children. ...read more.

This was seen as making Philip's foreign policy particularly successful due it being seen as the greatest victory for the Christian empire, and thus had a huge religious impact. However, Philip's greatest success when dealing with the Turks seems to be the negotiating of a truce in 1578. Despite the negative repercussions at the time involved with Philip putting his own problems before religion, the truce was highly successful as it allowed Philip to have little need for substantial military involvement in the Mediterranean, allowing him to move his armies further north in order to deal with the Netherlands and also his aspirations in France and England. This truce can be seen as having a negative impact on Philip's prestige due to the agreement being a sign that he had backed down and was inspired for fighting for Catholicism as his title 'champion of Catholicism' would suggest. However, its political benefits easily outweigh the impact it has on Philip's prestige and overall was one of Philip's most successful decisions in his foreign policy. One area where Philip achieved little success was in the last 15 years of his reign where he seemed to change his foreign policy to ...read more.

After many years of civil war and attempted interventions by Philip to turn France Catholic, Henry of Navarre, an anti Spanish protestant was crowned King of France. In response Philip ordered the transferral of troops from the Netherlands to attack France in a bid to claim the thrown for his daughter Elizabeth of Valois. Despite Henry becoming a Catholic, Philip's attack on France was highly unsuccessful and led to his third bankruptcy in 1596 and the removal of troops from the Netherlands during vital points of the revolt stopped victory against the rebels. Overall Philips foreign policy seemed to be successful early on in his reign due to him being defensive and reactive up to 1584 as it gained him Portugal and eliminated the threat of the Turks. However after 1584 Philip seemed to change to being an aggressive imperialist possibly due to the fact he wanted to leave behind some kind of impact as he realised he would not have long left as King, however this was unsuccessful as he tried to do to much in a short period of time, leaving his armies spread too thinly without enough equipment due to his mounting financial problems. ...read more.