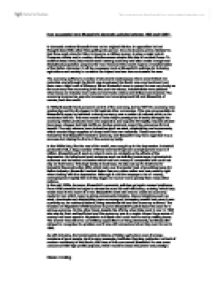 How successful were Mussolini's domestic policies between 1925 and 1939?

How successful were Mussolini's domestic policies between 1925 and 1939? In domestic matters Mussolini was not an original thinker. In opposition he had thought about little other than getting into power. Once he became prime minister he had three main aims for Italy: to become a military power, to play a major role in European affairs and to create a Mediterranean empire like that of ancient Rome. To achieve these aims, Italy would need a strong economy and also create a tough and disciplined population prepared for war. However this would require a transformation of the Italian character. It will be necessary look at Mussolini's policies for industry, agriculture and society to consider the impact and see how successful he was. The economy suffered a number of structural weaknesses: there were limited raw materials and although the North was developed the South was very backward and there was a high level of illiteracy. When Mussolini came to power he was very lucky as the economy was recovering from the post war slump. Industrialists were pleased when taxes on industry were reduced and trade unions and strikes were banned. The economy boomed as exports increased and unemployment fell and Mussolini, of course, took the credit. In 1925, Mussolini took personal control of the economy, but by 1927 the economy was weakening and the lire began to fall against other currencies. ...read more.

He thought he was showing the world the dynamism of the Fascist state. However it was a hollow victory; much of the land taken for grain production was unsuitable, yields were low and the price of bread increased. What's more, production increased but only at the expense of other crops such as olive oil, wine and citrus fruits which had all been important exports. Another project Mussolini considered a huge success was the land reclamation in the Pontine Marshes. They were drained and a network of small farms established. Land reclamation was a success in the sense that it created jobs and cleared malarial swamps like the Pontine, but the amount of land reclaimed was very small. Mussolini wanted to see fascism penetrate every aspect of Italian society, but he was neither logical in his ideas nor prepared to force through policies that might make him unpopular. The church was one area of Italian life where Mussolini moved carefully. Even though he was anti-religious, he was smart enough to realise the value of good relations with the papacy. He restored Catholic education in schools and increased government pay to priests, which won him the confidence of the Pope. In terms of relations with the church, his greatest achievement came with the Lateran Agreement of 1929. This ended the conflict between church and state. ...read more.

In 1928 the Fascist state inherited a complicated system of welfare run by various bodies. The party set up an umbrella organisation, the E.O.A (the agency for welfare activities) to control the distribution of funds. The result was there was limited sickness insurance after 1928, family allowances were extended and Infant welfare schemes were set up in the 1930s. However, on the whole, the welfare system was not particularly impressive. Hospital provision for example, was good in larger cities but poor in rural areas. Pension provision was very limited too. In reality, the Fascists saw the welfare system as a way of strengthening the nation, rather than helping individuals. The same is true of the O.N.D (the opera nazonale Dopolavoro) which organised state-sponsored after work entertainment and sport. Its aim was not just to entertain, but also to improve the health of Italians and to gain their support for the regime. It definitely helped win support for the regime but it did not help turn Italians into committed Fascists. Many of Mussolini's domestic policies appeared populist and successful at a superficial level. However, when you analyse the impact of the policies they rarely achieved their desired aims. Significantly, the poor state of the economy, the inability of Mussolini to convert the population to Fascism and the poor standard of living of the peasant population demonstrates the ineffectiveness of the policies. ?? ?? ?? ?? Kieran Cooling ...read more.