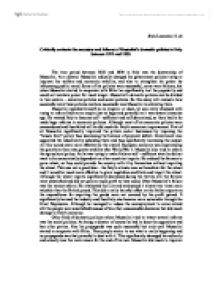 Critically evaluate the successes and failures of Mussolini's domestic policies in Italy between 1922 and 1939.

Janis Lasmanis 11. sb Critically evaluate the successes and failures of Mussolini's domestic policies in Italy between 1922 and 1939. The time period between 1922 and 1939 in Italy was the dictatorship of Mussolini. As a dictator Mussolini radically changed the government policies trying to improve the welfare and economic stability, and also to strengthen his power by influencing public mood. Some of his policies were successful, some were failures, but when Mussolini started to cooperate with Hitler he significantly lost the popularity and could not maintain power for much longer. Mussolini's domestic policies can be divided in two sectors - economic policies and social policies. So this essay will evaluate how successful were these policies and how successful was Mussolini in achieving them. Mussolini regarded himself as an emperor or duce, he was really obsessed with trying to reform Italy as an empire just as huge and powerful as it was several centuries ago. ...read more.

This was not a good idea - the Italy's climate was not beneficial for the wheat and it would be much more effective to grow vegetables and fruits and import the wheat. Although the wheat imports significantly decreased during the thirties still the farmers were unsatisfied and did not gain as much profit as they could. Other Mussolini's failure was the money reform. He revaluated the Lira and announced it almost two times more valuable than the British pound. This did a really harmful effect on the Italian exports as the expenditures for exporting the goods were not covered by the profit gained. It significantly harmed the industry and thus Italy also became more vulnerable through the Great Depression. Although he managed to reduce the unemployment to some extend still the people were unsatisfied because of his other unsuccessful decisions that did much damage to Italy's economy. ...read more.

Mussolini had almost no social guarantees - there was almost no signs of the health insurance not even talking about unemployment and other social guarantees. Also there was a huge corruption in the government instances so very often the money for good intensions just went into the pockets of many corrupted officials. And still there was huge unemployment problem even after Mussolini's attempts to reduce it. Looking at the Mussolini's domestic policy one can assume that his failures was much greater than his successes. This happened because of several reasons. Mussolini blindly fancied to establish the autarchy not even thinking about that it was impossible because he had not enough resources and territories to do so. Not knowing much about economics he made some crude mistakes trying to reform Italy's economy. Also his social polices were not well-rounded and workers and farmers were not satisfied enough but when Mussolini stared his foreign policy with Hitler the people totally lost faith in him and Mussolini lost power. ...read more.