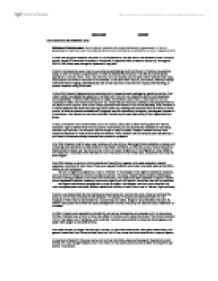 How Totalitarian was Mussolini's Italy?

History Essay 22/02/04 How Totalitarian was Mussolini's Italy? Definition of Totalitarianism: The principle of complete and unrestricted power in government. A form of government in which the ruler is an absolute dictator (not restricted by a constitution or laws or opposition etc.) In 1922 the king gave Mussolini the power to rule by decree for one year due to the Bolshevik threat. Mussolini quickly moved to consolidate his position. Thousands of opponents were arrested or beaten up. Throughout 1922 to 1923 there were changes of personnel in key jobs. Mussolini increased his power over his own party by establishing the Grand Council of Fascism, the supreme body, to which he made all appointments. In 1923 he reduced the influence of the RAS by converting the squads into a national militia. Also a new electoral law was enacted, now the party which received most votes, would obtain two-thirds of the seats in the Chamber. ...read more.

Il Duce, as Mussolini now called himself, was in full control. Easily able to deter the King (who still had the theoretical right to dismiss him) from any political involvement, he also ensured that members of the cabinet were his loyal servants. His ministers' role was simply to obey his orders. Mussolini himself held the most important ministries for most of the time he was dictator. Army officers' and civil servants soon realised that a pro-Fascist attitude enormously enhanced their promotion prospects. After 1922 Mussolini tried for even closer relations with the Vatican. Restoring Catholic education in schools and increasing state payments to priest helped win the Pope's confidence. In 1929 the Lateran Treaty restored the Pope's temporal power over the Vatican City in return for papal recognition of the Kingdom of Italy. Added to the treaty was a Concordat which defined the role of the Church in the Fascist state. ...read more.

Purges of party dissidents followed. By 1928 all party posts were made from party headquarters in Rome. The party thus became totally subservient to its leader. In 1926 a Fascist youth organisation (the Balilla) was set up. Membership was compulsory for all state school children. Members took an oath to follow the orders of the Duce and to serve the cause of the Fascist revolution 'with all my might, and, if necessary, with my blood'. Teachers were ordered to stress the Duce's genius, and pupils were taught to take pride in Draly. After 1926 workers no longer had the right to strike or to join free trade unions. Even great industrialists, who generally benefited from Fascist policies, soon lost faith in the corrupt and over-bureaucratic corporate system. In conclusion Mussolini's Italy was nearly, but not truly totalitarian, because the king still theoretically could dismiss him. Even though Mussolini was in full control of the country and was able to deter the King from any political involvement. ...read more.