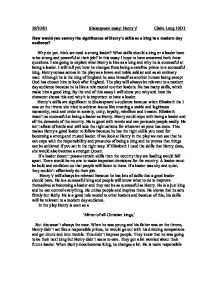 How would you convey the significance of Henry's skills as a king to a modern day audience?

29/10/01 Shakespeare essay: Henry \/ Claire Long 10DT How would you convey the significance of Henry's skills as a king to a modern day audience? Why do you think we need a strong leader? What skills should a king or a leader have to be strong and powerful at their job? In this essay I hope to have answered both these questions. I am going to explain what Henry is like as a king and why he is successful at being a leader. I will tell you how he changes from being a carefree prince to a successful king. Henry comes across in the play as a brave and noble soldier and as an ordinary man. Although he is the king of England he sees himself as another human being except God has chosen him to look after England. The play will always be relevant to a modern day audience because he is like a role model to other leaders. He has many skills, which make him a good king. By the end of this essay I will show you why and how his character shows this and why it is important to have a leader. Henry's skills are significant to Shakespeare's audience because when Elizabeth the I was on the throne she tried to achieve issues like creating a stable and legitimate monarchy, rank and order in society, unity, loyalty, rebellion and treason. Elizabeth wasn't as successful at being a leader as Henry. Henry could cope with being a leader and all the demands of the country. He is good with words and can persuade people easily. He isn't afraid of battle and will take the right actions for whatever anyone has done. ...read more.

He sees himself as an ordinary man and as a brave solider, not just a king. He doesn't want all the credit for winning the battle because he believes that it was God that helped them and it was God that made them succeed. This shows that Henry isn't big headed and knows what he believes in. He knows how to run the country and persuade people in making the right choices. He has a strong character and he is very religious and takes God seriously. Henry values his soldiers and country because he turned to God and asked for help. All his praying for his soldiers and the battle paid off. If Henry didn't have these qualities then they probably wouldn't have won the war. One of Henry's skills that make him an excellent leader is the use of rhetoric to persuade his men. In act 3 scene 1, he says a very persuasive speech that makes the soldiers ready for battle and gives them reasons for going into battle with France. His opening sentence is, 'Once more into the breach, dear friends, once more;' This is a very effective opening to the speech because I immediately started to listen. Throughout the speech Henry uses all sorts of language and persuasive phrases. He uses emotive language, similes, repetition and strong imagery. He creates images in the soldiers and the audience's mind about their families, mothers and fathers, 'Whose blood is fet from fathers of war proof.' He does this so it persuades them to go into battle because it will bring respect and honour to their family and their country, 'On, on, you noblest English.' ...read more.

He is an ordinary soldier. Shakespeare has structured the play well. It was vital that we saw Henrys character built from a young, careless Prince to a King and as he was King his character grew stronger and stronger. He has started at the bottom and rose to the top. We see his developing skills and know why he is a successful King. The role of the chorus has been important in the play because he introduces the play and tells the audience what is going on. The chorus in a Greek theatre consisted of one or more people who would update the audience. The reason for this is because plays were performed to an audience of thousands in an amphitheatre. The Greek theatre is set up with the stage in the centre and then the audience is around it, getting further and further away. Some people will see the back of actors or actresses and not hear as well so the chorus tells them so they can use their imagination and understand what's happening. So, hopefully now you will know some of the skills that make a good leader and how Henry shows this, but remember that there isn't a perfect king. Even Henry has bad points. Nobody can be perfect but they can try to be, and this is how people improve. There isn't, 'A mirror to all Christian kings,' The play Henry \/, will always be relevant to a modern day audience because it shows us a lot about leadership and trying to run a country. People can learn a lot from the play and try to use some of Henrys skills into becoming better in themselves. Henry \/ will be relevant for a long time because it is a well written and structured play in which morals and values are relevant to us all. ...read more.