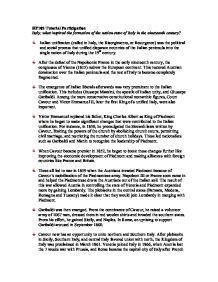 HP102 Tutorial Participation Italy; what inspired the formation of the nation-state of Italy in the nineteenth century? * Italian unification (called in Italy, the Risorgimento, or Resurgence) was the political and social process that unified disparate countries of the Italian peninsula into the single nation of Italy during the 19th century. * After the defeat of the Napoleonic France in the early nineteenth century, the congresses of Vienna (1815) redrew the European continent. This restored Austrian domination over the Italian peninsula and the rest of Italy to become completely fragmented. * The emergence of Italian liberals afterwards was very prominent to the Italian unification. This includes Giussepe Mazzini, the apostle of Italian unity, and Giussepe Garibaldi. ...read more.

These led nationalists such as Garibaldi and Manin to recognize the leadership of Piedmont. * When Cavour became premier in 1852, he began to boost these changes further like improving the economic development of Piedmont and making alliances with foreign countries like France and Britain. * These all led to war in 1859 when the Austrians invaded Piedmont because of Cavour's mobilization of the Piedmontese army. Napoleon III or France soon came in and helped the Piedmontese drove the Austrians out of the Italian soil. The result of this war allowed Austria in controlling the state of Venetia and Piedmont expanded more by gaining Lombardy. The plebiscite in the central states (Parmam, Modena, Romagna and Tuscany) ...read more.

Venetia joined Italy in 1866, when Austria lost the 7 weeks war with Prussia, and Rome became the capital city of Italy after French troops withdrew in 1870. The new government, headed by King Victor Emmanuel provided the basis for an Italian constitution, including a parliamentary government elected by limited suffrage (2% of the population) * Therefore, two reasons that could be thought as the main inspirations for this unification includes - The nationalistic feeling that aroused throughout the Italian people, and the territorial expansion that began from the territorial expansion of Piedmont. Source: Hause S. C and Maitby. W, Western Civilization: A History of European Society, 2nd edition, Belmont, CA, Thomson Wadsworth, 2005, pp 625-653, [Ch. 25: Europe in age of Nationalism, 1848-1870] *USP HP102 Course Reader 2006 Edgar H, The Making of Italy 1815-1870, Atheneum, New York (1971). ...read more.