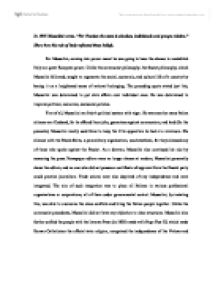 In 1935 Mussolini wrote, &quot;For Fascism the state is absolute, individuals and groups relative.&quot; Show how his rule of Italy reflected these beliefs.

In 1935 Mussolini wrote, "For Fascism the state is absolute, individuals and groups relative." Show how his rule of Italy reflected these beliefs. For Mussolini, coming into power meant he was going to have the chance to reestablish Italy as a great European power. Unlike the communist philosophy, the fascist philosophy, which Mussolini followed, sought to regenerate the social, economic, and cultural life of a country by basing it on a heightened sense of national belonging. The preceding quote stated just this; Mussolini was determined to put state affairs over individual ones. He was determined to improve political, economic, and social policies. First of all, Mussolini ran Italy's political system with vigor. He was seen by many Italian citizens as a Godsend, for he offered them jobs, guarantees against communism, and land (for the peasants). Mussolini mostly used force to keep the little opposition he had at a minimum. His alliance with the Black Shirts, a paramilitary organization, was beneficial, for they silenced any of those who spoke against the Fascist. As a dictator, Mussolini also continued his rule by censoring the press. ...read more.

The government reorganized the iron and steel industries, expanded hydroelectric plants, and embarked on other public works projects. He introduced many 'battles' against matters that needed improvements. He tried to make Italy self-sufficient in food and to increase the Italian population - farmers were encouraged to grow more wheat (the Battle for Grain), families were encouraged to have more children (the Battle for Births), and land for agriculture (the Battle for Land) was reclaimed. His aims, in the economic factor, were called 'productivism,' which was a battle to increase production. Within the Fascist Party there was a protection of private property and an encouragement of classes. Mussolini established a Corporate State, whose intention was not to destroy capitalism, but to create a new democracy. In theory, it was going to be a new type of democracy, but in practice, it was another form for Mussolini to gain strength and support. In 1934, Mussolini formed 22 corporations, or guilds, representing workers and employers in all phases of the economy. Each corporation included Fascist Party members on its governing council and had Mussolini as its president. ...read more.

Mussolini implemented a bachelor's tax for all men in order to encourage men to marry. He also offered loans as an incentive for married couples to have children. Furthermore, the prevention of increasing the population (i.e. abortions and birth control) was a major crime against the state and was prosecuted as such. In education, Mussolini demanded that the school be inspired by the ideals of fascism and to train Italian youth to understand fascism and live in the historic climate created by the Fascist revolution. In order to obtain such demands, the schools and education systems were gradually reformed; schoolbooks were rewritten, all teachers in schools and universities had to swear an oath to defend Fascist regime, and boys were expected to become soldiers, and all children were encouraged to join the Balilla - an organization which trained them to be good fascists. The year 1922 was renamed the Year One, since that was when Mussolini came into power. As can be seen, Mussolini was not concerned with the well being of the individual, but rather the state. His policies were intended to benefit Italy, as a country. His major concern was to bring Italy back to the great power it had once been in the Roman ages. "The State above all." ...read more.