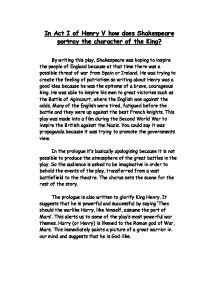 In Act I of Henry V how does Shakespeare portray the character of the King?

In Act I of Henry V how does Shakespeare portray the character of the King? By writing this play, Shakespeare was hoping to inspire the people of England because at that time there was a possible threat of war from Spain or Ireland. He was trying to create the feeling of patriotism so writing about Henry was a good idea because he was the epitome of a brave, courageous king. He was able to inspire his men to great victories such as the Battle of Agincourt, where the English won against the odds. Many of the English were tired, fatigued before the battle and they were up against the best French knights. This play was made into a film during the Second World War to inspire the British against the Nazis. You could say it was propaganda because it was trying to promote the governments view. In the prologue it's basically apologising because it is not possible to produce the atmosphere of the great battles in the play. So the audience is asked to be imaginative in order to behold the events of the play, transferred from a vast battlefield to the theatre. The chorus sets the scene for the rest of the story. The prologue is also written to glorify King Henry. It suggests that he is powerful and successful by saying 'Then should the warlike Harry, like himself, assume the port of Mars'. ...read more.

He also informs him if the information he gives regarding the Salic law is untrue it will result in an unjust war with France killing innocent people. Henry knows that he is subjected to flattery and so advises Canterbury to try not to flatter him. 'Shall drop their blood in approbation'. This suggests that the King does not want the people of England to die needlessly, but whatever his decision, they will support him. Again he emphasises the point that the war has to be a just war and if it is not then the English won't have God's backing to help them win the war. He takes his duty as King of England very seriously. Henry has the authority to stop Canterbury and exercises this by stopping Canterbury while he is speaking. May I with right and conscience make this claim?' He does this because Canterbury has gone of the point of whether or not they can go to war and has started to ramble on. He needs a straight answer because it is such a burning issue. This shows that he has a thorough understanding of the situation and is decisive. After the second part of Canterbury's speech it is time for Henry to make his decision. The lords and the bishops put pressure on the King to try to flatter him. Canterbury reminds him of his ancestors saying that they were warlike people. ...read more.

' By God's grace'. He accepts that he was wild and reckless but now he is a changed man and not what he is assumed to be. The tone in his voice then changes because he threatens the Dauphin that he will turn 'his balls to gun-stones'. He is now angry because this insult has hurt his pride. He is also angry because of the deaths the war will cause all because of the insult of the tennis balls. The Dauphin will be blamed for the loss of life. 'For many a thousand widows shall this his mock mock out of their dear husbands, mock mothers from their sons, mock castles down'. There will be more people crying for the dead than laughing at Henry's attempt at war. He is a good politician because he shifts the blame. He again says that God is on his side and that he is a good Christian king. The reason for the war is a 'hallowed cause'. It is not personal revenge but punishment from God because of the Dauphin's evil deeds. This is a declaration of war. As soon as the ambassador is escorted out Henry orders the preparations for the coming war to begin. The play ends positively by showing that he is determined to gain his land. Henry's character heroism, that he is a good Christian, he is eloquent, he is inspirational and rational. His weaknesses are that he is subjected to flattery, his vanity, and his personal pride. The character of Henry could be different because it depends on whether the actor can portray these qualities of Henry's or not. Paras Patel ...read more.