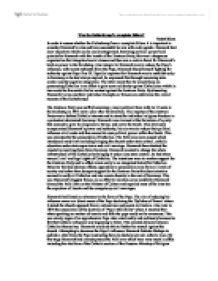 In order to assess whether the Kulturkampf was a complete failure it is important to consider Bismarck's aims and how successful he was with each agenda. Bismarck had clear objectives which can be easily cate

Was the Kulturkampf a complete failure? Nehal Khan In order to assess whether the Kulturkampf was a complete failure it is important to consider Bismarck's aims and how successful he was with each agenda. Bismarck had clear objectives which can be easily categorised. Retaining political power held priority for Bismarck with the launch of the Zentrum Party; this was a dangerous organisation that integrated social classes and thus was a certain threat for Bismarck's hold on power in the Reichstag. Also integral to Bismarck was to reduce the Pope's influence, with recent outbursts from the Pope, Bismarck found himself fighting for authority against Pope Pius IX. Equally important for Bismarck was to establish unity in Germany as he had always aspired, he expressed this through increasing state control and by negative integration. The latter meant that he would focus on persecuting Catholics in an effort to gain some solidarity against Catholicism which in turn could be favourable for his contest against the Zentrum Party. By dissecting Bismarck's aims and their individual triumphs or failures can determine the overall success of the Kulturkampf. ...read more.

Bismarck had found an adversary in the form of the Pope. The aim of reducing his influence came as a direct cause of the Pope declaring the 'Syllabus of Errors' where it stated the church opposed liberal, nationalism and recent civilisation. Also later in 1870 the enunciation of the doctrine of 'Papal Infallibility' where it asserted that when speaking on matters of morals and faith the pope could not be erroneous. This was clearly signs of an apprehensive Pope who acted rashly and recklessly because he felt that Catholic influence was beginning to falter. This created division between Catholics themselves. Bismarck could use this to further his assault against the church. Attempting to decrease the Pope's influence Bismarck forbade Bishops to publish a letter from the Pope instructing them to disobey any anti-catholic laws. By this stage Bismarck had already passed the Falk laws which were very much in effect including the abolition of the Catholic section of the Prussian Ministry of Religion and Education. ...read more.

He was successful in retaining political power in the short term. As a bonus he gained more state control, through civil marriages and a state veto over church appointments, over the church to add to his dominance. His aim of decreasing support for the Zentrum Party was a big failure as it in actuality had adverse effects and increased support for the organisation. Bismarck was able to adjust as he then allied with the Zentrum Party as he realised they were a powerful political party to reckon with. Therefore it can be safely concluded that the Kulturkampf was a serious of failures with subtle triumphs for Bismarck. Importantly this allowed him to retain political power hence I feel the Kulturkampf was not a complete failure as many historians surmise but in realty Bismarck not only maintained political power but also kept his reputation intact and even managed to make progressions of state control despite many failures namely the rise of the Zentrum Party which he later countered by making alliance with the Catholic party. It was a viable method of retaining short-term political power. ...read more.