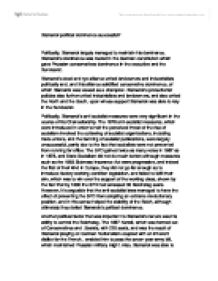 Bismarck political dominance successful? Politically, Bismarck largely managed to maintain his dominance. Bismarck's dominance was rooted in the German constitution which gave Prussian conservatives dominance in the executive and the Bundesrat. Bismarck's steel and rye alliance united landowners and industrialists politically and, and this alliance solidified conservative dominance, of which Bismarck was viewed as a champion. Bismarck's protectionist policies also further united industrialists and landowners, and also united the North and the South, upon whose support Bismarck was able to rely in the Bundesrat. Politically, Bismarck's anti socialist measures were very significant in the course of his Chancellorship. The 1878 anti-socialist measures, which were introduced in order to halt the perceived threat of the rise of socialism involved the outlawing of socialist organizations, including trade unions, and the banning of socialist publications, were largely unsuccessful, partly due to the fact that socialists were not prevented from running for office. ...read more.

However, it is arguable that the anti-socialist laws managed to have the effect of preventing the SPD from adopting an extreme revolutionary position, and in this sense helped the stability of the Reich, although ultimately they defied Bismarck's political dominance. Another political factor that was important to Bismarck's tenure was his ability to control the Reichstag. The 1887 Kartell, which was formed out of Conservatives and Liberals, with 220 seats, and was the result of Bismarck playing on German Nationalism coupled with an inherent dislike for the French, enabled him to pass the seven year army bill, which maintained Prussian military might. Also, Bismarck was able to keep the Liberals, with whom he split in 1878 following their refusal to support his protectionist tariffs, split and unable to threaten his dominance. ...read more.

Also, Bismarck's Kulturkampf also resulted in an alienation of the Centre Party, and its leader Ludwig Windhorst often encouraged its members to vote with the Radicals, which added another unnecessary layer of political opposition to Bismarck, although many of the laws, such as the control over church appointments were retained. Ultimately, Bismarck's ability to retain the dominance of the Kaiser was the key factor in his dominance. This is shown by the fact that even though he had no majority until 188, he comfortably remained in office, however as soon as he fell out with Wilhelm II, he was dismissed. The Kaisers favour was decisive, especially due to the constitution that Bismarck himself had drafted, and ultimately it determined how dominant a chancellor could be politically. ...read more.