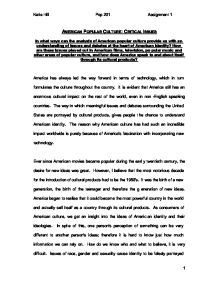 In what ways can the analysis of American popular culture provide us with an understanding of issues and debates at the heart of American identity?

AMERICAN POPULAR CULTURE: CRITICAL ISSUES In what ways can the analysis of American popular culture provide us with an understanding of issues and debates at the heart of American identity? How are these issues played out in American films, television, popular music and other areas of popular culture, and how does America speak to and about itself through its cultural products? America has always led the way forward in terms of technology, which in turn formulates the culture throughout the country. It is evident that America still has an enormous cultural impact on the rest of the world, even in non-English speaking countries. The way in which meaningful issues and debates surrounding the United States are portrayed by cultural products, gives people the chance to understand American identity. The reason why American culture has had such an incredible impact worldwide is purely because of America's fascination with incorporating new technology. Ever since American movies became popular during the early twentieth century, the desire for new ideas was great. However, I believe that the most notorious decade for the introduction of cultural products had to be the 1950's. ...read more.

Not only was it music that caused such outrage for parents during the 1950's, films were also considered a bad influence. In a film review, Tom Dirks says that the 1950's film, 'Rebel without a Cause is a film that, '...sympathetically views rebellious, American, restless, misunderstood, middle-class youth...the story provides a rich, but stylised look at the world of the mid 1950's from the perspective of the main adolescent character.'3 This is exactly what the film industry tries to achieve every time they get an idea for a film; they want it to be seen as representing something that reflects on an issue in the correct way and this statement says that, 'Rebel without a Cause', does this extremely well. The film replicates quite a lot of characteristics of the teenage view of American culture, as the film shows rebellion from the teens, yet they know when to tolerate the control, which their parents have over them. This also represents certain aspects of society in America today, although in my view there are a lot more entities today that create rebellious youths. Rap music is an example of American popular culture, which greatly influences young people, but it does not necessarily influence them in the correct way. ...read more.

Teenagers of America today are the main targets of cultural products; music and film have always been a hit with a young audience. But it is teenagers who are more likely to be deeply affected by the media industry, which is why we should recognise that the youth of American society will always be the innovators of American identity. What we see as the youth of America today, will be the next generation of people who will make a difference in a few years time to the way the country exists. What the youths consume in today's society from the American media industry is different to what their parents and grandparents consumed in their teenage years. American identity is changing rapidly all the time and this is evident through films, television programmes, music and magazines. American identity is not something that stays the same forever, as with other national identities, they evolve. Of course there will always be certain stigmas attached to America, the things that will never change, but as far as popular culture goes, there is always room for change, hopefully a change for the better. 1 www.prism.troyst.edu 2 www.prism.troyst.edu 3 Tim Dirks, www.filmsite.org 4 Gina Dent, Black Popular Culture, 1998, p.296 Katie Hill Pop 201 Assignment 1 1 ...read more.