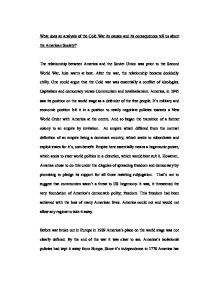 What does an analysis of the Cold War its causes and its consequences tell us about the American Society?

What does an analysis of the Cold War its causes and its consequences tell us about the American Society? The relationship between America and the Soviet Union was prior to the Second World War, luke warm at best. After the war, the relationship became decidedly chilly. One could argue that the Cold war was essentially a conflict of ideologies. Capitalism and democracy verses Communism and totalitarianism. America, in 1945 saw its position on the world stage as a defender of the free people. It's military and economic position left it in a position to neatly negotiate policies towards a New World Order with America at the centre. And so began the transition of a former colony to an empire by invitation. An empire which differed from the normal definition of an empire being a dominant country, which seeks to subordinate and exploit states for it's, own benefit. Empire here essentially means a hegemonic power, which seeks to steer world politics in a direction, which would best suit it. However, America chose to do this under the disguise of spreading freedom and democracy by promising to pledge its support for all those resisting subjugation. That's not to suggest that communism wasn't a threat to US hegemony- it was, it threatened the very foundation of America's democratic polity; freedom. ...read more.

Communism verses capitalism. Domestically America's congress passed the National Security Act in 1947 to advise on all matters of security. The Soviet threat was not given top priority and policy was directed more at containment, to prevent the spread of communism rather than roll back. The Truman administration did not see communism as a major threat to US interests, but was suffering under a propaganda campaign by the Republicans desperate to get into office, thus establishing another cause of the cold war. The Republicans argued that Truman was not taking the Soviet threat seriously and would eventually lead to communist insurgency against the US. Truman in response promised America that he would take the spread of communism seriously. Policy changed with the unexpected invasion by North Korea into South Korea in 1950, it was now clear that the policy of containment was not working, USSR had plans for world domination and had to be stopped!. The Cold war reached new heights with the emancipation of countries in the Third World who seemed to gravitate towards Russia's vision of a communist world. They were impressed by Russia's success since breaking its imperialist bonds. This was source for concern because those countries in Africa and Latin America were thinking of cutting off their ties with the world economy, denying America assess to cheap raw materials. ...read more.

America's democracy states that all men are created equal and government "should protect and promote in the equal measure for liberty of each individual.........government exists solely to secure rights, it does not rule over people....it establishes the framework within which individuals unalienable rights can be expressed and preserved" pg 9 Democracy. Communism threatened to destroy these very ideals. If communism managed to infiltrate the rest of the world then it would certainly take over America. The cold war also tells us that America was trying to maintain it's hegemonic power. Russia refusal to fall in line with American policies and all things American was seen as a direct challenge to America's power. Communism was tying to stop the spread of capitalism preventing America access to new markets. It challenged and managed to undermine America's credibility, to the rest of the world, by gaining support from countries in Asia and Latin America. The Marshall plan worked in shifting Western European support towards America. In the end the cold war tells us that the conflict of ideologies was won by America and it's democratic ideals. According to Machiavelli man is intrinsically selfish and will always try to peruse it's own self-interest. This is why communism could never succeed. Convincing individuals to forgo their own needs for the collective good of others cannot be sustained. The Kremlin realised this and eventually was forced to let go of its Marxist ideals. ...read more.