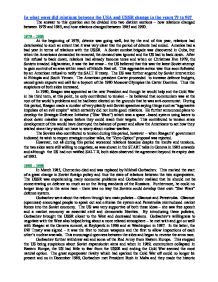 In what ways did relations between the USA and USSR change in the years 79 to 90?

In what ways did relations between the USA and USSR change in the years 79 to 90? The answer to this question can be divided into two distinct sections - how relations changed between 1979 and 1985, and how relations changed between 1985 and 1990. 1979 - 1985 At the beginning of 1979, d�tente was going well, but by the end of this year, relations had deteriorated to such an extent that it was very clear that the period of d�tente had ended. America had a bad year in terms of relations with the USSR. A Soviet combat brigade was discovered in Cuba, but when the Americans demanded its removal, the demand was ignored and the US had to back down. After this refusal to back down, relations had already become tense and when on Christmas Eve 1979, the Soviets invaded Afghanistan, it was the last straw - the US believed that this was the latest Soviet attempt to gain control of an area within reach of Middle East oil. ...read more.

He further announced plans to develop the Strategic Defence Initiative ("Star Wars") which was a space -based system using lasers to shoot down missiles in space before they could reach their targets. This contributed to tension since development of this would have destroyed the balance of power and allow the Americans to act how they wished since they would not have to worry about nuclear warfare. The Soviets also contributed to tension during this period, however - when Reagan's' government indicated its wish to reopen strategic nuclear talks, the "Zero Option" proposal was rejected. However, not all during this period worsened relations because despite the insults and tensions, the two sides were still willing to negotiate, as was shown in the START talks in Geneva in 1982 onwards and although the US had not ratified SALT II, both sides observed the agreement beyond its expiry date of 1985. ...read more.

In the latter, the INF Treaty was signed - it was the first to reduce weapons and the first to allow inspections of each other's nuclear arsenals. This encouraged openness between the sides and began to reverse the arms race. Gorbachev further withdrew aid and some of the Red Army from Eastern Europe. This stopped the US being suspicious about Soviet expansionist aims and when in 1989, communism collapsed in Eastern Europe, the US had little to fear from the USSR and ending the Cold War seemed the most natural option. The great superpower rivalry which had sparked the Cold War off could no longer be present and so in December 1989, Gorbachev met President Bush in Malta and they made the historic announcement that the Cold War was over. Thus by 1990, a state of war did not exist between the two countries. Also, why did relations change? (8 marks) ...read more.