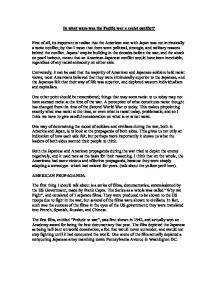 In what ways was the Pacific war a racist conflict?

In what ways was the Pacific war a racist conflict? First of all, its important to realise that the American war with Japan was not intrinsically a racist conflict; by that I mean that there were political, strategic, and military reasons behind the conflict. Japans' empire building in the decades before the war, and the attack on pearl harbour, meant that an American-Japanese conflict would have been inevitable, regardless of any racial animosity on either side. Conversely, it can be said that the majority of American and Japanese soldiers held racist views; most Americans believed that they were intrinsically superior to the Japanese, and the Japanese felt that their way of life was superior, and deplored western individualism and capitalism. One other point should be remembered; things that may seem racist to us today may not have seemed racist at the time of the war. A perception of what constitutes racist thought has changed from the time of the Second World War to today. This makes pinpointing exactly what was racist at the time, or even what is racist today, problematic, and so I think we have to give careful consideration on what is or is not racist. One way of determining the mood of soldiers and civilians during the war, both in America and Japan, is to look at the propaganda of both sides. This gives us not only an indication of how each side felt, but perhaps more importantly it shows us what the leaders of both sides wanted their people to think. Both the Japanese and American propaganda during the war tried to depict the enemy negatively, and it used race as the basis for their reasoning. I think that on the whole, the Americans had more vicious and effective propaganda, because they were simply adapting a stereotype which had existed for years. (talk about the yellow peril here). AMERICAN PROPAGANDA. ...read more.

A booklet that was based on Colonel Tsuji Masanobu's report on why the Japanese needed to fight in south East Asia was given to all officers and enlisted men. It was called Read this and the war is won (Kore dake Yomeba Ware wa Kateru). As the name suggests, it told of not only how to survive in tropical combat zones, but explained to the Japanese soldiers in simple terms exactly why they had to fight in these other Asian countries. Tens of thousands of soldiers had this booklet before the bombing of pearl harbour. There was also a civilian equivalent, reaching the public in August 1941, entitled The way of the Subject (Shinmin no Michi). It told the Japanese public who they should aspire to be, how to behave to be a model citizen. Like Frank Capra's "know your enemy - Japan" - it also offered the official Japanese version of the history of the west, telling of how the west were the ones hankering after world domination, proven by their rampant colonialism in Asia. This colonialism, the white control of Asian popularities, was greatly criticised in Read this and the war is won. It tells oh how, in total, in India, Malaya, the East Indies, Indochina, and the Philippines 800,000 whites controlled the lives of 450 million Asian people. The whites were described as exploitative, arrogant people who lived in luxury, whilst people around them starved and toiled for a pittance. Interesting fact about the American and Japanese propaganda. What one side felt was their strong point, when one side would cast a positive light on what they did, the other side would see this in a negative way. It could well be argued that the Americans and Japanese were not altogether too different during the war. They seemed irrevocably different, but strangely enough they sounded the same. Just as the west saw Japan as hell bent on World domination due to its empire building, so Japan saw the west as expansionist due to its colonialism. ...read more.

In Malaya, the Chinese population of that country were strongly anti Japanese, and collaborated with the west. In the East Indies, the Hukbalachap guerrilla army, or the peoples Anti-Japanese army, claimed responsibility for the deaths over 5,000 Japanese soldiers. And even in countries which had at first accepted and welcomed the Japanese, discontent grew after only a few months. The Indian National Army was disbanded in 1942 after their disastrous campaign to free India - its leader was imprisoned by the Japanese, bringing about greater anti-Japanese sentiment in India. In Burma, the Japanese were treated much better than the native Burmese peoples, to their great discontent. In Indonesia as well the treatment by the Japanese was met first with disapproval, then with outright hostility. In essence, Pan Asianism was borne from necessity; Japan obviously had ulterior motives in attempting to set up a co-prosperity sphere. The idea was to gain much needed resources from the other East Asian countries to help Japan's defence, and to stir up anti-western feelings at the same time. John Alison, working for the American Embassy in Japan, in his Autobiography "Ambassador from the Prairie", he narrates his wartime experiences in Japan after pearl harbour. He describes how after the declaration of war the Japanese police placed him under house arrest. Contrary to popular belief, he describes how he was treated with respect by both the Japanese servants in his home, and the Japanese police who protected and imprisoned him before he was released back to America in an ambassador exchange. He tells of one instance when he found American passports at the embassy which were meant to be destroyed, and instead of punishing him, the Japanese police helped him to destroy them. He comments on how he found it very difficult to associate the Japanese with those who were involved in the rape of Nanking in China in 1937. Racial stereotypes broken down that the Japanese were nice to Americans, possibly a lot nicer than most Americans would believe. ...read more.