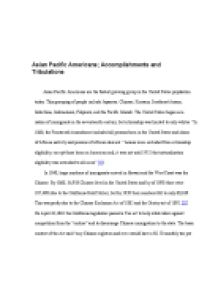 ﻿Asian Pacific Americans; Accomplishments and Tribulations Asian Pacific Americans are the fastest growing group in the United States population today. This grouping of people include Japanese, Chinese, Koreans, Southeast Asians, Indochina, Indonesians, Filipinos, and the Pacific Islands. The United States began as a nation of immigrants in the seventeenth century, but citizenship was limited to only whites. ?In 1868, the Fourteenth Amendment included all persons born in the United States and aliens of African nativity and persons of African descent. ?Asians were excluded from citizenship eligibility, except those born on American soil, it was not until 1952 that naturalization eligibility was extended to all races? [1]1 In 1840, large numbers of immigrants arrived in Hawaii and the West Coast was the Chinese. By 1860, 34,933 Chinese lived in the United States and by of 1890 there were 107,488 (due to the California Gold Strike), but by 1920 their numbers fell to only 60,639. This was partly due to the Chinese Exclusion Act of 1882 and the Gentry act of 1892.[2]2 On April 26,1862 the California legislators passed a Tax act to help white labor against competition from the ?coolies? and to discourage Chinese immigration to the state. The basic context of the Act said ?any Chinese eighteen and over would have a $2.50 monthly tax put on them for the privilege of working and living in the United States.[3]1? This is how the United States rewards people who are willing to work and help build their new country. Most of the Chinese, coming to California, were first taken to ?Angel Island? situated in the northern part of the San Francisco Bay[4]1. The Asian immigrants came chasing their dreams of freedom, gold, and the promise of wealth to be had in the land of many riches. But this was not to be so. Instead of riches the Chinese found enslavement, low wages, menial jobs, r****m, and not many avenues open to help in their struggle for economical advancement. ...read more.

The Japanese excelled in farming and many eventually were able to purchase or lease land to work. The farming industry is where the Japanese-Americans contributed most to. In 1912 the Japanese-Americans owned 12,726 acres in California, 1921 they owned 74,769 acres and leased 383,287 acres. In 1919 the total food output of Japanese farmland was 13% from 1.6% of the total West Coast farmland and the market value of these crops was 67 million dollars.[10]4 Kyyutaro Abiko founded the Yamato Colony in Merced, California. Abiko?s vision was that the future of Japanese-Americans was in farming. In 1904 he purchased 3,000 acres in Livingston, California and divided it into 40-acre units. Abiko advertised in Japanese-American newspapers in the hope of starting a community of Japanese-American farmers. Land was sold for $35.00 an acre and was financed for a five-year period by the Nichi Bei Ginko, a bank associated with Abiko. In 1906 the first Issei, Tajiro Kishi, purchased some of the land and started his farm. By 1908 there were 30 more farms started. The farmers first started with apples, peaches, grapes, and almonds, but harvest was some time away. To help the farmers through until their crops came in they planted vegetable crops to bring in money. This turned out to be a profitable venture due to San Francisco being near by. By 1910 a food buying cooperative was established, a marketing cooperative started in 1914, and a packing shed built in 1917. By 1976 the association had 4,190.5 acres in almonds, 1,647.5 in peaches, 616 in grapes, 296.5 in other tree fruit, 8.5 in kiwi fruit, 1,180.5 in sweet potatoes and conducted ten million in business per year[11]4. The Japanese Colony never went into any other commercial development, such as grocery stores, gas stations, laundries, or dry-goods thinking if they concentrated on agriculture and avoided competition with other races they could decrease the chances of racial hostilities. ...read more.

I guess I will have to go to greater lengths to find more information and write my own book on the subject. In order to show the prosperity of the Asian-Americans I felt the need to give a bit of their history in the West, good or bad. I also can see now how I could pull a single paper out of two or three areas that I wrote on. PS: I have enjoyed the class and believe you are and will make an excellent teacher. It was nice having a fellow Airedale to talk with. ________________ [1] 1 Sinnott, Susan. Extraordinary Asian Pacific Americans. Pg. 10, 12, 29 Children?s Press 1993, Los Angeles. [2]2 Miller, Willard E. United States Immigration A Reference Handbook. Pg. 46&47. On Temporary World Issues, ABC-CLIO Inc. 1996, Santa Barbara, California. [3] [4] [5]3 Information taken from tour guide at the Beringer winery in 1971. [6] [7]4 Iwata, Masakazu. Planted in Good Soil, A History of the Issei in the United States Agriculture. Pg. 4, 10, 25, 52, 129. Peter Lang publication, 1996, Los Angeles, California. [8]5 Information obtained from displays at the ?Japanese-American Museum Los Angeles, California October 2001. [9] [10] [11] [12]6 Japanese American History Archives.E-Media 1995. Accessed 1030 PM November2001 http://www.amacord.com/fillmore/museum/jt/jaha/jaha08.html. [13]7 Five Views: A History of Japanese Americans in California. Accessed 11 November 2001. Government History 1995. http://www.cr.nps.gov/history/5views/5views4b.html. [14]8 Beginning Library Research on Asian American Studies. Accessed at 1020AM on 20 October 2001. Stanford University Libraries/Academic Information Resources, 1999. http://www.garamond.stanford.edu/depts/ssrg/adams/shortcu/asam.html. [15] [16] [17]9 Manzar-America?s Concentration Camp. Accessed October 22, 2001. Manzanar 1995. wwwmember.aol.com/EARTHSUN/Manzar Other cites accessed for information are as follows 1941 INTERNMENT OF JAPANESE US CITIZENS. www.powerup.com.au/~dominion/ff/a03.html. The Politics of Deregulation and Japanese Agriculture. www.rewschool.com/term/po137.ht. American Past and Present Online-Comprehensive Immigration Law 1924. Wysiwyg://16/http://longman.awl.com/divin?t/theme_primarysources_Immigration_11asp. Utah History Encyclopedia. http://www.media.utah.edu/medsol/UCME/j/JAPANESE.html. Relocation Center, Encyclopedia Entry. I infoplease.com. http://www.infoplease.com/ce5/CEO43699.html. r****m remained after interment camps closed. The Detroit News. http://www.detnews.com/menu/stories/13546.html. Timeline. http://www.oz.net/~cyu/internment/timeline.html. Also interview with my Mother-law who was interned in the WWII camps at the Arkansas camps. ...read more.