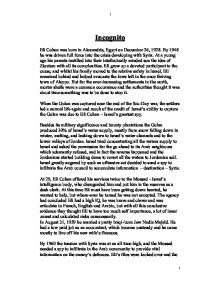 Incognito Eli Cohen was born in Alexandria, Egypt on December 26, 1928. By 1948 he was driven full force into the crisis developing with Syria. At a young age his parents instilled into their intellectually minded son the idea of Zionism with all its complexities. Eli grew up a devoted participant to the cause, and whilst his family moved to the relative safety in Israel, Eli remained behind and helped evacuate the Jews left in the once thriving town of Aleppo. But for the ever-increasing settlements in the north, mortar shells were a common occurrence and the authorities thought it was about time something was to be done to stop it. When the Golan was captured near the end of the Six-Day war, the settlers led a normal life again and much of the credit of Israel's ability to capture the Golan was due to Eli Cohen - Israel's greatest spy. Besides its military significance and bounty plantations the Golan produced 30% of Israel's water supply, mostly from snow falling down in winter, melting, and leaking down to Israel's water channels and to the lower valleys of Jordan. Israel tried concentrating all the waters supply to Israel and asked the permission for the go ahead to its Arab neighbours which adamantly refused, and in fact the reverse happened and the Jordanians started building dams to revert all the waters to Jordanian soil. ...read more.

Ever more increasing was Kamal Ta'abat's reputation, many people would mob to his apartment to get advice from the almond eyed Ta'abat. These included military officers, as Kamal reputation preceded him, he had to keep the steady influx of women ongoing. He claimed later that these women "would help him escape in time of crisis!" With time Kamal was taken even more into the confidence of the highest echelons of power. He became a confidante of George Saif, high up in the Ministry of Information. The complete trust Ta'abat enjoyed among his oblivious informants is illustrated by the following incident, which might have serious consequences for the Israeli agents. One day Kamal was sitting in Saif's office reading a classified document while the Syrian was on the phone. One of the ministry's directors entered the room unannounced. 'How is it that you dare allow a stranger to read a classified document?' he angrily asked Saif. Saif calmly replied, 'There's nothing to worry about. He's a trusted friend.'" When the Ba'ath took power in 1963, Eli was firmly established in Syrian high society. Meanwhile, every few days he transmitted important information to his Israeli handlers via a radio transmitter he had hidden in his room. Periodically Eli would return to Israel to speak with his Israeli handlers and visit his wife and small children. ...read more.

Yoni Jay English - Incognito He then participated in a show trial, his verdict was predetermined. World leaders, wealthy individuals, the Israeli government, the Pope, and others all intervened on his behalf. But it was to no avail. He was hanged on May 18, 1965. He wrote a last letter to his wife before he was hung in front of a seething crowd. The execution was broadcast on Syrian television. After his execution, a white placard filled with anti-Zionist writing was wrapped around his body and he was left hanging for six more gruelling hours. Eli Cohen provided an incredible amount of intelligence data to the Israeli Army over a period of three years. In 1967, the Israelis were able to capture the Golan Heights in two days - part of this was due to the intelligence he provided. As Intelligence Chief Meir Amit said, Eli "succeeded far beyond the capabilities of most other men." What is perhaps most amazing about Eli Cohen is that he was genuinely liked, even loved by so many of the top Syrian leaders. He had made such an impact on Syrian national defences, and understood almost all of their secrets. He genuinely fitted into life in the Syrian capital and he was never suspected of being a spy until almost the very end. It is for these reasons Eli Cohen is known as Israel's greatest spy. Information sites: Gideon's spies - book. Internet sources. 6 1 1 1 ...read more.