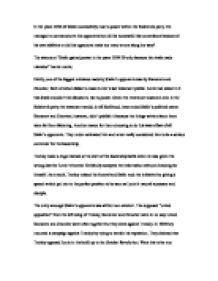 Is it right to say &quot;Stalin gained power in the years 1924-1929 only because his rivals made mistakes&quot;?

In the years 1924-29 Stalin successfully rose to power within the Bolshevik party. He managed to outmanoeuvre his opponents but did his successful rise come about because of his own abilities or did his opponents make too many errors along the way? The statement "Stalin gained power in the years 1924-29 only because his rivals made mistakes" has its merits. Firstly, one of the biggest mistakes made by Stalin's opponents was by Kamenev and Zinoviev. Both of whom failed to make Lenin's last testament public. Lenin had stated in it that Stalin shouldn't be allowed to rise to power. Given the reverence towards Lenin in the Bolshevik party the testament would, in all likelihood, have ended Stalin's political career. Kamenev and Zinoviev, however, didn't publish it because the things written about them were far from flattering. Another reason for them choosing to do this was a flaw of all Stalin's opponents. ...read more.

Then in 1927 after the left wing were united once more they were thrown out of the party by Stalin for going against party policy, called "factionalism". This was a fatal mistake by them, particularly Trotsky who passed the "factionalism" law that allowed expulsions. These mistakes by Stalin's rivals definitely aided his rise to power; however, it would be somewhat unfair to say that Stalin's rise to power can be attributed only to the short comings of his opponents. Whilst his rivals were making mistakes Stalin also utilised his know-how to stay out of trouble and manipulate the situation is his favour. Firstly, as mentioned earlier, Trotsky didn't attend Lenin's funeral and this may have partly been Trotsky's fault but it was Stalin's cunning that made it possible and his quick thinking saw him deliver a speech at the funeral that would be a factor in his rise to power. ...read more.

Stalin eventually deserted Bukharin and shifted to the left knowing that his 'employees', the people he had granted membership into the party, would vote his way regardless of which side of the party he represented. Whether it be forming partnerships or watching as others destroyed each with the squabbles, Stalin cleverly took advantage of people and the coalition they had, or were willing to form.. After looking at all the evidence I would disagree with the statement that it was only his opponents' mistakes that allowed Stalin to become leader of the Bolshevik party. Stalin was also clever and out-smarted his opponents at nearly every turn. He opponents certainly made mistakes along the way but Stalin was smart enough to capitalise on them, such as the left wing falling foul to factionalism. If he had not been clever and manipulative he wouldn't have been able to take advantage of the situations that arose. Furthermore, unlike the other contenders, Stalin fully utilised his position within the party to his advantage, such as getting new members that would most likely vote his way. ...read more.