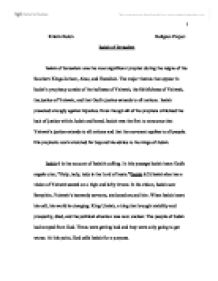 Kristin Bolch Religion Project Isaiah of Jerusalem Isaiah of Jerusalem was the most significant prophet during the reigns of the Southern Kings Jotham, Ahaz, and Hezekiah. The major themes that appear in Isaiah's prophecy consist of the holiness of Yahweh, the faithfulness of Yahweh, the justice of Yahweh, and that God's justice extends to all nations. Isaiah preached strongly against injustice. Even though all of the prophets criticized the lack of justice within Judah and Israel, Isaiah was the first to announce that Yahweh's justice extends to all nations and that the covenant applies to all people. ...read more.

When Isaiah hears his call, his world is changing. King Uzziah, a king that brought stability and prosperity, died, and the political situation was now unclear. The people of Judah had strayed from God. Times were getting bad and they were only going to get worse. At this point, God calls Isaiah for a purpose. King Ahaz, who succeeded King Uzziah, was worried about a political alliance between Aram and Israel which threatened to attack Judah and replace him as king. God sent the prophet Isaiah to King Ahaz to deliver a message to relieve his fear. The message was, "Be careful, keep calm and don't be afraid." ...read more.

Isaiah said to King Ahaz, "Therefore the Lord himself will give you a sign: The virgin will be with child and will give birth to a son, and will call him Immanuel." (Isaiah 7:14) As Christians, we read this prophesy as a message about the ultimate child of promise, the Messiah. However, that prophecy may have had a more immediate message for King Ahaz. This prophecy could have predicted the birth of Hezekiah, who would succeed him as king. Even though this new king did not appear in Judah before the exile, Isaiah's prophecy kept faith for a king who would guide the people back to God. ...read more.