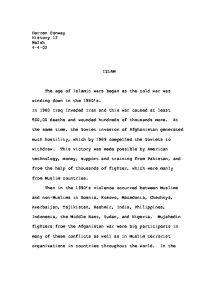 Islam - The age of Islamic wars began as the cold war was winding down in the 1980s.

Darren Conway History 12 Walsh 4-4-02 ISLAM The age of Islamic wars began as the cold war was winding down in the 1980's. In 1980 Iraq invaded Iran and this war caused at least 500,00 deaths and wounded hundreds of thousands more. At the same time, the Soviet invasion of Afghanistan generated much hostility, which by 1989 compelled the Soviets to withdraw. This victory was made possible by American technology, money, support and training from Pakistan, and from the help of thousands of fighter, which were manly from Muslim countries. Then in the 1990's violence occurred between Muslims and non-Muslims in Bosnia, Kosovo, Macedonia, Chechnya, Azerbaijan, Tajikistan, Kashmir, India, Philippines, Indonesia, the Middle East, Sudan, and Nigeria. Mujahedin fighters from the Afganistan war were big participants in many of these conflicts as well as in Muslim terrorist organizations in countries throughout the world. ...read more.

In 1983, 299 people were killed on the U.S. Marine barracks in Beirut, 270 killed on Pan Am Flight 103 in 1988, and 224 in the 1998 attack on the U.S. African embassies. These acts of violence are clearly goals of Osama bin Laden. He declared holy war on the United States enjoined Muslims to kill Americans indiscriminately and attempted to mobilize Muslims everywhere. He has not succeeded in this effort, in part because of the many divisions within Islam. The United States, on the other hand, has declared a global war on terrorism, but in fact there are many wars by different governments against different terrorists groups. The United States is primarily concerned with Al Qaeda and other governments are concerned with their own local terrorists. ...read more.

The only way the Muslim wars will end is when its causes change or are changed. The resentment and hostility towards the West could be reduced by changes in U.S. policies toward Israel. But in the long run, improvements in social, economic and political conditions in Muslim countries would be needed. So basically changes need to be made amongst the United States and other eastern countries for any type of improvement to be made. If governments fail to meet the basic welfare and economic needs of their people and suppress them, then this will only allow for rebellious violent opposition, not only to themselves but also to other Western governments that supports them. I believe that the Muslims hatred for The United States will take years to repair if it can even be fixed. Nothing can change between the U.S and them until what happened on September 11th, is resolved. ...read more.