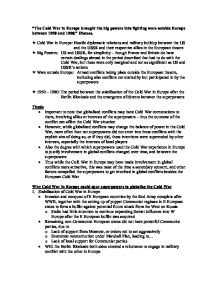 &quot;The Cold War in Europe brought the big powers into fighting wars outside Europe between 1950 and 1980.&quot; Discuss.

saw Korea as the first sign of Soviet expansionism outside of Europe, and sought to apply containment militarily to preempt the spread of Communism into Asia: "Aggression had to be stopped as early as possible. If not answered in Korea, it would only result in new [Soviet] advances in more central areas" (Lundestad) o Also, after China entered the war and pushed UN forces back out of North Korea, MacArthur proposed using nuclear weapons against China, but Truman dismissed him instead - this shows that even in the age of nuclear monopoly for the US, they were careful not to carry out too provocative moves that could have instigated the SU into an armed response in Europe or elsewhere o Thus in this case the US's behaviour in Korea was largely governed by the fresh memories of the European Cold War experience, and the determination not to allow a repeat to happen elsewhere Case 2: Middle-East Conflicts * The Arab-Israeli wars too, largely, disagree with the idea that the wars outside of Europe that the super powers were involved in were due to the Cold War. * In the Arab-Israeli wars, the background of the historical tension between the Israelis and other Arab states are omnipresent, and serve as an underlying factor in all the wars. This has nothing to do with the Cold War, or the super powers. * Looking into specifics, each Arab-Israeli war has its causes that are largely isolated from the Cold War, and though there may be aid from super powers, the origins and sustaining factors of the war are generally local. ...read more.

However, the US delay of aid was explained in two ways: o The Americans were afraid to offend the Arabs, and further minimize any influence the USA might have on the region, since they were also trying to gain 3rd World support and access to Mid East oil o Sadat had sent the US a message not to act on Israel's behalf too hastily as Sadat guaranteed that the assault was a limited operation, aimed at forcing Israel to return land won in 1967, which would be followed by a peace agreement. o Hence, it's seen that Egypt which had received military aid from the USSR, and has been traditionally backed by the USSR, had a fairly strong influence over the US. This blurring of side-taking was not a characteristic of the Cold War at all, and indicated the capability of the local players to manipulate the super powers to their own agenda. While the role of the US was larger and more important than in the previous Arab-Israeli wars, of almost negligible intervention, it is still clear that all along the scene is set by the local powers, and the war carried out entirely for their own purposes. In a way, the USSR and US are trying to hitch a ride, perhaps attempting to use the war to establish some form of dominance over the Arab states, which were crucial for their supply of oil, and their competition is linked to the Cold War. However, they did not succeed in "fighting [the war]", the USSR being relegated to military aid supplier, and the USA as saviour, but neither the initiator nor in control of the war, nor gaining any form of Cold War victory. ...read more.