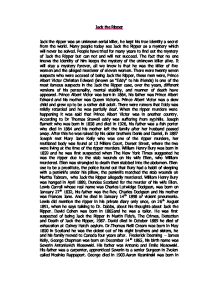 Jack the Ripper Jack the ripper was an unknown serial killer, he kept his true identity a secret from the world. Many people today see Jack the Ripper as a mystery which will never be solved. People have tried for many years to find out the mystery of Jack the Ripper but can not and will not succeed. The fact that no one knows the identity of him keeps the mystery of the unknown killer alive. It will stay a mystery forever, all we know is that he was the killer of five women and the alleged murderer of eleven women. There were twenty seven suspects who were accused of being Jack the Ripper, these men were, Prince Albert Victor Christian Edward (known as "Eddy" to his friends) is one of the most famous suspects in the Jack the Ripper case, over the years, different versions of his personality, mental stability, and manner of death have appeared. Prince Albert Victor was born in 1864, his father was Prince Albert Edward and his mother was Queen Victoria. Prince Albert Victor was a slow child and grew up to be a rather dull adult. There were rumors that Eddy was mildly retarded and he was partially deaf. When the ripper murders were happening it was said that Prince Albert Victor was in another country. According to Dr Thomas Stowell eddy was suffering from syphilis. Joseph Barnett who was born in 1858 and died in 1926, his father was a fish porter who died in 1864 and his mother left the family after her husband passed away. ...read more.

On March 19th, he stole a gold watch and other things from a woman in Maidstone. And he committed similar thefts in April. He was arrested in August, sentenced to seven years in prison. Alexander Pedachenko was born on 1857 and was first suspected in 1928, he was suspected because he was allegedly sent by the Russian secret Police to discredit the London Police, but was later thrown into a criminal lunatic asylum. He died in 1908. Walter Sickert was a part of the ripper cases since the 1970's, but in the 1990's the peculiar artist became a ripper suspect in his own right. Patricia Cornwell has claimed to find DNA evidence linking Sickert to one "Ripper letter". James Kenneth Stephan - Nicholas Vassily. End of suspects. There were 5 actual victims these were, Mary Ann Nichols who was born as Mary Ann Walker on August 26, 1845 in Shoe Lane off Fleet Street. At the time of her death the East Londoner described her as a 30-35 year old women, at her inquest her father said that she was nearly 44 years old, but she looks 10 years younger than her actual age. She had brown eyes, a dark complexion with brown hair turning grey, she had 5 front teeth missing, and her teeth were slightly discoloured. She also had a small scar on her forehead from a childhood injury. Annie Chapman was born as Eliza Anne Smith in September 1841. ...read more.

The police officials who were on the Jack the Ripper case were, Inspector Frederick Abberline, Sir Robert Anderson, Inspector Walter Andrews, Superintendent Thomas Arnold, Detective Constable Walter Dew, Detective Sergeant George Godley, P.C. James Harvey, Inspector Joseph Henry Helson, Chief Inspector John George Littlechild, Sir Melville Macnaghten, James Monro, Chief Inspector Henry Moore, P.C. John Neil, Inspector Edmund Reid, Detective Constable Robert Sagar, Major Henry Smith, P.C. William Smith, Inspector John Spratling, Chief Inspector Donald Swanson, Sergeant William Thick, P.C. Ernest Thompson, Sir Charles Warren, P.C. Edward Watkins, Sergeant Stephen White and Chief Constable Adolphus Frederick Williamson. The ripper murders kept happening throughout a number of years, the ripper only targeted prostitutes or women who used to be prostitutes. Personally I think that the real ripper was mentally ill and didn't get enough help, I also think that he/she had a bad childhood and was brought up in a bad way. Looking back at the witnesses I think it is strange that none of them saw the ripper's true appearance, one of them must have got a good look at him/her. This brings up a whole new mystery, which again we can never find out if the witnesses really were at the scene of the crime or if they were just lying. The mystery of Jack the ripper will never end pupils from all different generations will try hard to discover any other clues to the Ripper mystery, and some will always be thinking about it for the rest of their lives. It is a mystery, which will never be solved no matter how hard anybody tries. ...read more.