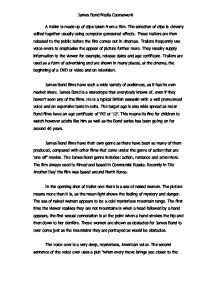 A trailer is made up of clips taken from a film. The selection of clips is cleverly edited together usually using computer generated effects. These trailers are then released to the public before the film comes out in cinemas. Trailers frequently use voice-overs to emphasise the appeal of picture further more. They usually supply information to the viewer for example, release dates and age certificate. Trailers are used as a form of advertising and are shown in many places, at the cinema, the beginning of a DVD or video and on television. James Bond films have such a wide variety of audiences, as it has its own market share. James Bond is a stereotype that everybody knows of, even if they haven't seen any of the films. He is a typical British assassin with a well pronounced voice and an expensive taste in suits. The target age is also wide spread as most Bond films have an age certificate of 'PG' or '12'. This means its fine for children to watch however adults like him as well as the Bond series has been going on for around 40 years. James Bond films have their own genre as there have been so many of them produced, compared with other films that come under the genre of action that are 'one off' movies. The James Bond genre includes: action, romance and adventure. ...read more.

As the gun is fired a flame within the pistol builds up, this represents a male penis ejaculating. When the bullet leaves the end of the gun barrel the muzzle shatters and the ice looks as if it is coming out of the screen, an oxymoron is created as Bonds fiery, dangerous job, whilst being able to keep a cool head. The bullet then morphs into an Aston Martin DB7 being pursued by a Jaguar XJR being driven Zao. This in essence sums up the basic genre of a James Bond film, guns, cars and general action. This image of the Aston Martin then cuts a series of explosions; this is the beginning of the montage that runs for most of the trailer. At this point the tempo of the accompanying music quickens to give the viewer a feeling something is about to happen. The montage consists of explosions, car chases, naked embrace, surfing and James Bond firing. At the end of the montage there is a low angle shot of James Bond connoting power and control. The image of Bond viewed through a graphic interpretation of the riffling in a gun barrel is a classic shot featured in all James Bond films. Blood then sweeps across the screen suggesting Bond has killed the person hold the gun, this connotes that Bond can get out of any situation. ...read more.

Lots of puns are included from the dialogue "don't blow it all at once" at this point a big explosion goes off. A pun said by Halle Berry is also included as she asks James Bond what his name is, he replies "James Bond", Halle then says "That's a mouth full" connoting oral sex. Diegetic sound is used as you can hear the explosions as you see them. Fast music is also played periodically when there is lots of action. Near the end of this trailer there is another superimposed title "Pierce Brosnan is James Bond", this is selling the star. The audience is the same as it always has been since the 1960's with the very first viewers, a new generation of viewers has just begun as the watch the old movies on DVD and video. The special effects have become better and better over the years attracting a new audience of action lovers. James Bond in the future will be packed full of action with amazing effects and stunts. The Bond theme I fell will be the same as it has always been, Bond fighting with the latest political adversary. There will still the classic characters for example 'Q', 'M' and Moneypenny. The Aston Martin DB9 has just been released, this could be the next Bond car as it almost a tradition that Bond is given an Aston Martin. ?? ?? ?? ?? James Bond Media Coursework ...read more.