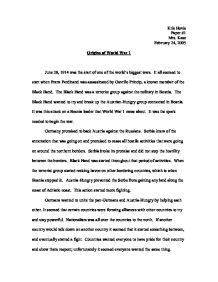 June 28, 1914 was the start of one of the world's biggest wars. It all seemed to start when

Kris Hovis Paper #1 Mrs. Kase February 24, 2005 Origins of World War 1 June 28, 1914 was the start of one of the world's biggest wars. It all seemed to start when Franz Ferdinand was assassinated by Gavrilo Princip, a known member of the Black Hand. The Black Hand was a terrorist group against the military in Bosnia. The Black Hand wanted to try and break up the Austrian-Hungry group connected in Bosnia. It was this attack on a Bosnia leader that World War 1 came about. It was the spark needed to begin the war. Germany promised to back Austria against the Russians. Serbia knew of the annexation that was going on and promised to cease all hostile activities that were going on around the northern borders. Serbia broke its promise and did not stop the hostility between the borders. Black Hand was started throughout that period of activities. When the terrorist group started reeking havoc on other bordering countries, which is when Bosnia stepped in. Austria-Hungry prevented the Serbs from gaining any land along the coast of Adriatic coast. ...read more.

Military was another huge aspect leading up to World War 1. Every country knew that Germany had one undeniably great military and was trying to build-up their naval status. Between 1910 and 1914 Military was the main concern through out the European countries. They knew with out good military powers they would never be able to defeat Germany when it came down to it. By 1914 in was said that France and Germany both grew military personal by 800,000 people. There was competition between the countries on who would build the best naval force, or the best weapon to defeat other countries. With the growth of military power through out the countries was a major attention getter. Government's role was mainly influenced by the militarism through out the early 1900's. Germany decided to choose war in 1914 for one simple reason. They knew they were a major threat to all the countries against them, and the more time that they waited, they felt the Russians might becomes more feared then them. Germany came out with the Schlieffen plan which stated that Germany would fight France and Russia but not at the same time. ...read more.

The League of Nations was started to try and maintain peace after the war. Germany was forced into the peace order when their military started to show signs of defeat. Wilson was the main reason for the peace between the countries that were at war. With out him coming up with these fourteen points there would be no way for the world to be the way it is today. Peace was brought up in a way which everyone won. The cost of the war was outrageous. No matter how you look at it, the war was worthless and cost 150 billion dollars. It was also estimated that around ten million people who fought in the World War lost their lives on the battlefields. If the war did anything besides spark new means for technology, it also proved to be the deadliest war between European countries ever. The Peace conference between the countries battling at war was a sign that America could work things out. No body believed that the war would ever end until Germany got total satisfaction throughout the countries. With help of Wilson, and his points it put an end to this disaster. ...read more.