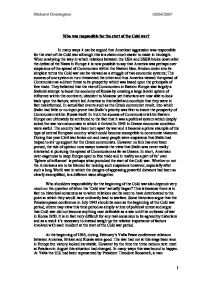 Who was responsible for the start of the Cold war?

Who was responsible for the start of the Cold war? In many ways it can be argued that American aggression was responsible for the start of the Cold war although this is a claim much easier to make in hindsight. When analysing the way in which relations between the USA and USSR broke down after the defeat of the Nazis in Europe it is now possible to say that America was perhaps over suspicious of the spread of Communism within the Eastern bloc. Broken down into its simplest terms the Cold war can be viewed as a struggle of two economic systems; The success of one system in turn threatened the other and thus America viewed the spread of Communism as a direct threat to its prosperity which was based upon the principals of free trade. They believed that the rise of Communism in Eastern Europe was largely a Stalinist attempt to boost the economy of Russia by creating a large Soviet sphere of influence within the continent, obedient to Moscow yet historians are now able to look back upon the factors, which led America to this belief and conclude that they were in fact misinformed. In actual fact events such as the Greek communist revolt, into which Stalin had little or no input prove that Stalin's priority was first to insure the prosperity of Communism within Russia itself. In truth the success of Communism within Eastern Europe can ultimately be attributed to the fact that it was a political system which deeply suited the war torn economies in which it thrived In 1945 in Greece economic condition were awful. The country had been torn apart by war and it became a prime example of the type of central European country which could become susceptible to communist takeover. During that year Civil war broke out and many people were suspicious that Stalin had helped to stir up support for the Greek communists. ...read more.

In 1944 Stalin had marched troops into Iran but had agreed that six months after the end of the war he would remove them. The West did not recognise that oil was Stalin's one and only real motive aside from border protection for maintaining a presence in Iran or at least publicly this is the attitude they displayed. Instead they made out that it was a Stalinist attempt to expand communist ideas into Asia as a result the United States went to the United Nations to demand Stalin withdraw troops from the country. Initially Stalin ignored their demands but eventually succumbed in 1946. The West viewed this as a victory on their part; Stalin had realised that he could not do as he pleased just because he had played a major part in winning the war, the threat of Communism had be extinguished but the East on the other hand saw the Iran crisis as America bullying Russia into a corner and a generally hypocritical and favouritist politics. This was because currently Iran granted oil concessions to the U.S.A and Britain but not Russia. This was most unfair because Russia was the country which most definitely needed the oil the most and arguably deserved it the most too. The crisis, the end of the lend-lease agreement and rejection of reparations to Russia by the West had the cumulative effective of convincing Stalin that the U.S. was set upon the economic destruction of the Soviet Union. It became one of the factors that led to Truman prompting Kennan for his 'Long telegram' and sparked the wave of Anti-Sovietism that permeated the American media. U.S. paper Newsweek in a September 1946 addition lead with the headline, "The Soviet government has made up its mind that Capitalism must be destroyed if Communism is to survive" The battle lines were now well and truly beginning to be drawn between the two superpowers. ...read more.

And, given this, is it possible to argue that had neither side possessed nuclear weapons there would have been less self-restraint exercised by Stalin and Truman instead leading to the possibility of real and 'Hot' war which could potentially have had been far more disastrous implications that what in reality actually happened? In conclusion therefore, it is impossible come to any solid judgement as to when the Cold War actually began and further more who should hold responsibility for its beginnings. A historian must instead try to attach relative significance to each important event which occurred during the early Cold war period and attempt to infer in what ways each was significant to the conflict as a whole. In my opinion Truman's decisions to drop atomic bombs on Hiroshima and Nagasaki were highly important events which shaped the nature of the conflict to come. When in 1949 Stalin responded by developing his own nuclear arsenal this was also highly significant as it removed President Truman from his military high ground and left both sides careful where they trod politically. Ultimately though responsibility for the start of the 'Cold war' conflict has to be laid at the feet of the Americans. Hiroshima and Nagasaki were both acts of extreme aggression not just upon the Japanese but against the entire world - they sent out the message 'Don't mess with America or you'll live to regret it.' In a world already in a fragile state after two world wars in quick succession the U.S. was far too aggressive in it's immediate post-war foreign policies towards East Europe and the Soviet Union and showed no sympathy or willingness to allow this war-torn area to recover economically in a way which suited it. The incentive of increased American economic growth proved to be too great for Truman and his administration and although they were right to be weary of Stalin they took things too far and perhaps had ulterior motives in shielding European countries from communist regime change. ?? ?? ?? ?? Richard Overington 30/04/2007 1 ...read more.